The brandhouse Number One Taxi Driver Campaign and Road Safety 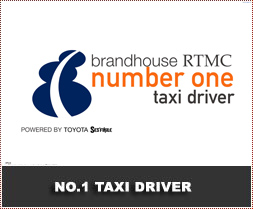 Even though the old and non-roadworthy state of the taxi fleet is one of the major contributing factors to road accidents, the role of reckless drivers who do not respect the rules of the road and the rights of other road-users, should not be underestimated. It is necessary as well to focus on the role played by taxi drivers in taxi operations.

Commuters have the right, at all times, to travel in safety and in comfort, with operators expected to deliver high levels and quality of services. It is the responsibility of Government and traffic authorities to keep operators on their toes and ensure that they respond adequately to passenger demands. By providing an incentive to safety conscious drivers we can enhance both the safety of minus commuters and other road users sharing the roads with minibus taxis.

The brandhouse Number One Taxi Driver Campaign [started in 2004] is such an initiative striving to enhance road safety by addressing and rewarding road safety amongst our minibus taxi drivers!

The Department of Transport has applauded taxi associations for having implemented the driver promotion incentive schemes which encourage drivers to treat passengers with respect, respect the rules of the road and personal and taxi cleanness

Government / Department of Transport reaction to the Campaign

Winners and nominees for the brandhouse Number One Taxi Driver Campaign have made important comments and even suggestions on how they have - and wish to continue to enhance road safety:

brandhouse and the Number One Taxi Driver

brandhouse has emphasized that this project continues to demonstrate its commitment to promoting responsible consumption and the social upliftment of both taxi drivers and their respective commuters. 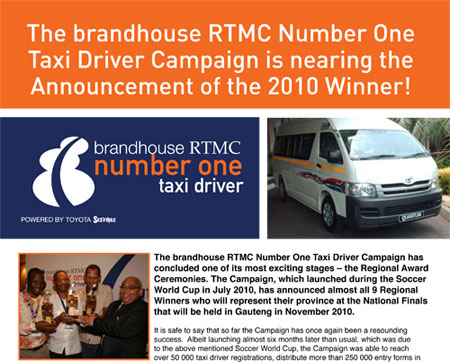 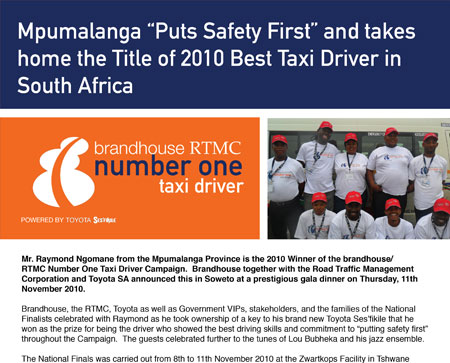