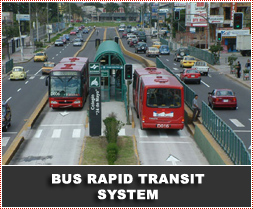 The Department of Transport has made it clear that the Bus Rapid Transit System [BRT] is crucial to the success of South Africa's transport system. Without a good bus service that is accessible, affordable and attractive to a broad range of people across society, local transport simply cannot work. Bus Rapid Transit (BRT) is a mass road-based public transport system that mimics rail systems. A BRT system is a high quality, customer-oriented transport system which will deliver fast, comfortable, and low-cost urban mobility with a modern, efficient and comfortable service to public transport users.

Bus rapid transit (BRT) is a broad term given to a variety of transportation systems that, through improvements to infrastructure, vehicles and scheduling, attempt to use buses to provide a service that is of a higher quality than an ordinary bus line. The BRT will play a leading role in transforming public transport within cities to a situation where it will become the preferred mode of travel for the majority of residents, and where it will make a major contribution towards the more efficient development of the city as a whole.

Currently, a high number of daily passenger trips first go to the central parts of cities, before arriving at the final destination. These commuters no longer will have to travel via the CBD to reach their final destination. The public transport priority measures to be implemented will reduce travel times, having an enormous economic impact. Immediately after completion of the construction work, journey times for road users will reduce, having a positive impact on vehicle operating costs and savings on time in vehicles.

The main features of the Bus Rapid Transit System are:

Objectives and implementation for South Africa

The South African public transport system consists predominantly of rail and bus services that are subsidised by the government and the mini-bus taxi service which is unsubsidised. These do not work in an integrated fashion and actually compete with one another for commuters.  The principal project objective in Johannesburg is to upgrade the quality and performance level of the public transport system. A brief overview of the Rea Vaya System in Johannesburg provides more insight to the Bus Rapid Transit System:

The Johannesburg BTR system will be integrated with the Gautrain project linking Johannesburg and OR Tambo International Airport with Tshwane and other existing systems.

The BRT System as a fast, comfortable and low-cost urban transport system played a major role in making the venue for 2010 World Cup accessible to spectators and projecting the image of our cities. The Integrated Transport Plan for host cities' Cape Town, Tshwane, Durban, and Bloemfontein among several others will include a BRT transport system to promote the use of public transport ahead of the 2010 soccer spectacle.

The Bus Rapid Transit System has the full support of the Ministry and Department of Transport and it is a flagship project for both the 2009 and 2010 FIFA soccer tournaments. There is an identified need for high quality, customer-oriented public transport system which is fast, comfortable and offers low-cost mobility. This bus system will also have routes leading to the training and main stadiums.

The BRT routes have been designed to link up with the inner-city distribution systems and various other development nodes and residential areas. Various public transport interchange facilities along the routes provide for connection to other road-based public transport services servicing other areas of the city.

The project will require the provision of new infrastructure as well as the upgrading of existing infrastructure to benefit South Africa far beyond 2010.

It is important to understand that the Bus Rapid Transit System is a well-known transport system implemented internationally. BRT is gaining popularity around the world with no fewer than 40 BRT systems now operating in Latin America, Northern America, Europe, Australasia and Asia. More than 80 systems are in the planning stage, including those in London and New York City. Most of the systems are part of a new international trend in city development and re-development called transport-orientated development (TOD). This is based on successful projects in South America that started in Brazil in the 1970s.

The system emerged as a necessary option for Beijing to reduce emissions from traffic, and particularly the soaring number of private vehicles. It offered a cost-effective solution to city traffic, supplementing the rail network at one-tenth of the cost of a rail system to construct.

Successful BRT systems in Bogota and Brazil have improved commuter travelling times in these cities, reduced the number of accidents and contributed to improved air quality. The essential difference between a bus system and BRT is that BRT operates longer buses on dedicated bus lanes. Passengers get a regular, faster and congestion-free ride.

The Johannesburg Rea Vaya operator business plan has been modelled on successful BRT systems in Latin America, where they have almost identical situations to those in South Africa, with large numbers of minibus taxis and buses vying for passengers, and where both incumbent taxi and bus operators have become the new BRT operators. Rea Vaya operators will be compensated on the basis of vehicle kilometres run, rather than the number of passengers carried, and consultation has been taking place with industry representatives – particularly the minibus taxi industry.

Nearly two years since the first line of Beijing's bus rapid transit (BRT) system began operation, the rapid passenger transport system is contributing to the reduction of the city's severely congested roads and associated air pollution for which the city is infamous.

The implementation of the BRT is seen as an economic development project with short, medium and long-term impacts and benefits. The main focus in South Africa is on Johannesburg's ambitious plans which will form the backbone of, if not the framework for, a new-look city dominated by wide boulevards lined with landscaped pavements, multi-storey affordable flats, offices, shops and entertainment venues. The system and the accessibility it brings will go a long way towards physically and mentally integrating the city and improving the quality of life of inhabitants. Reliable public transport will also “result in more flexible employment and transport arrangements”, which are currently often constrained by the existing bus and taxi systems.

Considering that traffic volumes are escalating by 7% per year in the economically active corridor between Johannesburg and Tshwane, carbon dioxide emissions from private cars will increasingly contribute to global warming. The use of BRT systems will, therefore, contribute to cleaner cities with reduced carbon monoxide emissions.

There are unfortunately risks to the timely implementation of the Bus Rapid Transit System:

Global best practice has shown that conflict is minimised when existing operators are drawn into BRT systems. Johannesburg is working towards negotiated contracts with the existing taxi and bus operators on routes so that they effectively become the new joint operators of the BRT system. Tshwane taxi operators have also indicated they will buy into the BRT system if they become partners in the main system and not just the feeder system.

These BRT systems are not seen as the final solution to public transport in South Africa but will form part of an integrated system of different modes and linked to cycleways and walkways as part of the non-motorised transport system that should also be developed.

The success of these systems can only be judged once they are operational, but it is hoped that they will assist in meeting the needs of public transport users.