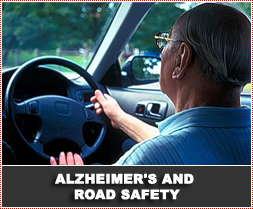 Introduction to Alzheimer’s and Safety

Alzheimer's disease, the most common form of dementia, is described as an incurable, degenerative, and terminal disease diagnosed in people over 65 years of age. Less prevalent early-onset Alzheimer's can occur much earlier. An estimated 26.6 million people worldwide had Alzheimer's in 2006 – A number that may quadruple by 2050.

Although each sufferer experiences Alzheimer's in a unique way, there are many common symptoms including memory loss. As the disease advances, symptoms include confusion, irritability and aggression, mood swings, language breakdown, long-term memory loss, and the general withdrawal of the sufferer as his or her senses decline.

This poses a social dilemma for most as driving is seen as a fundamental right. It represents freedom, independence, self-worth, inclusion and access. Where the country lacks effective public transportation quitting too soon restricts independence for someone who otherwise may function well for several years. When Alzheimer’s disease is diagnosed it is one of the many issues that have to be evaluated and the future considered.

Risks of Alzheimer’s to Safe Driving

Driving is a complex activity that requires good judgment, quick thinking and fast reactions, as well as good perceptual abilities. For a person with Alzheimer’s, driving inevitably becomes difficult, and he or she may become unsafe on the roads. With dementia, an individual's capacity to assess his or her driving abilities may also diminish. People with Alzheimer’s are especially likely to minimize the complexity of driving and overestimate their abilities.

There are a number of research studies that illustrate the dangers of driving and Alzheimer’s disease. For example, a Swedish study by Johansson and others found between 47-53 per cent of drivers over 65 years who died in accidents showed either early signs or actually had Alzheimer’s disease.

Poor driving performance increases with increased dementia severity. However, not all people with Alzheimer’s are unsafe drivers at a given point in time and Alzheimer’s should not be the sole justification for suspending driving privileges. Instead, an on-the-road driving test, or another functional test, is the best way to assess driving skills in dementia. A decline in visuospatial skills, which help drivers judge distances and predict upcoming traffic problems, plays a large role in making people with Alzheimer's unsafe drivers. Small occurrences in their vision such as a dog jumping behind a fence may distract them, so they fail to notice important cues, such as brake lights or traffic signs.

Alzheimer’s should not be compared to other changes in later life that affect driving, such as eyesight problems and slow reaction times. Many older adults who don't have dementia can assess their driving without family intervention and make gradual changes to the way they drive.

The progression of this disease is usually gradual and somewhat unpredictable. Everyone with Alzheimer's disease or other irreversible causes of dementia will eventually lose the ability to drive safely, due to problems with:

These scientists are now creating tests to show when it is time for people with early Alzheimer’s disease to stop driving. In recent studies, researchers recruited 40 people with early-stage Alzheimer’s who still had their driver’s licenses to take the road test, and compared how 115 older drivers without dementia handled the same trip.

The results, reported in the journal Neurology, are striking. On average, the Alzheimer’s drivers committed 42 safety mistakes, compared with 33 for the other drivers. Lane violations, such as swerving or hugging the centre line as another car approaches, were the biggest problem for Alzheimer’s drivers.

Measures to stop the Alzheimer’s Patient from Driving

Families struggle with the decision to limit or stop the family member from driving and the sense of dependence may prevent people with dementia from giving up the car keys. Unfortunately, no examination or single indicator exists to determine when a person with dementia poses a danger to himself or others. Families must determine when a person's attention span, distance perception or ability to process information makes it difficult for him or her to respond safely in driving situations.

What are the warning signs?

Everyone with irreversible dementia will eventually become unsafe to drive because of the degenerative, progressive nature of the brain disease. The question will always be: - at what point is someone unable to continue to drive safely?

This is not an easy question for a family and as Alzheimer’s is increasingly diagnosed in its earliest stages, it can be hard to tell when a loved one is becoming a danger.

It is important for the family to observe and keep a written record of observations to share with the person, family members and health care professionals. Observations that might indicate the need to stop driving are:

In hindsight, many family members and caregivers regret permitting a loved one to drive longer than it was safe. The result is always prolonged anxiety for caregivers and placing others at risk. It is best to get support when making and implementing decisions about driving. The more people who are asked to help, the less any one person has to do and the greater the likelihood that the person with dementia will get the best support.

How do we stop the person with Alzheimer’s from driving?

It is important to consider the person’s feelings and perceived loss of independence when explaining why he or she can no longer drive. Helping the person with dementia make the decision to stop driving - before you have to force the person to stop - can help maintain a positive sense of self-esteem.

The most effective approach to limit or stop driving involves progressive steps and a combination of strategies that fit the family's circumstances, resources and relationships. For people in the early stages of dementia, driving is best reduced over time rather than all at once.

Explain your concerns about his or her unsafe driving with the person, giving specific examples, and ask the person to voluntarily stop driving. The following steps might assist in explaining the need to stop driving:

Role of Caretakers and Family

Because Alzheimer’s cannot be cured and is degenerative, management of patients is essential. Alzheimer's disease is known for placing a great burden on caregivers/family; the pressures can be wide-ranging, involving social, psychological, physical, and economic elements of the caregiver's life.

No two families dealing with dementia will resolve transportation issues in exactly the same way. Roles and relationships within families can affect decisions about when and how a person should stop driving.

Caregivers can reduce stress and increase their chances of success by relying on others for emotional support, transportation assistance, financial assistance or to meet other needs. Caregivers need to remember that family members tend to follow long-established patterns for making decisions. It is unrealistic to think that patterns will change when handling a difficult issue like driving safety.

Disagreements in families are often the result when individuals do not have the same opportunities to assess driving abilities. Having factual information about driving behaviour does not guarantee families will reach a consensus on when to limit driving. However, frequent, open communication about specific, observed behaviours and concerns may help to lessen differences.

What if the person won’t stop driving?

If the person insists on driving it might require more drastic measures:

It is suggested that a person with dementia should make the transition from driver to passenger over a period of time. Open, early and continual communication can help the person with Alzheimer’s and the family to agree on a course of action before a crisis occurs. Once that decision is taken it should, however, be a firm and final decision. It is important that the safety of the person with Alzheimer’s and that of other road users be protected at all times!