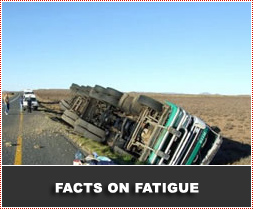 According to the National Sleep Foundation’s 2005 Sleep in America poll, 60% of adult drivers – about 168 million people – say they have driven a vehicle while feeling drowsy in the past year, and more than one-third, (37% or 103 million people), have actually fallen asleep at the wheel!

The National Highway Traffic Safety Administration conservatively estimates that 100,000 police-reported crashes are the direct result of driver fatigue each year.

According to data from Australia, England, Finland, and other European nations, all of whom have more consistent crash reporting procedures than the U.S., drowsy driving represents 10 to 30 percent of all crashes.

The prevalence of sleep-related crashes varies from country to country. Driver sleepiness has been found the cause of between 1.5% (in the United States) to over 30% (on UK motorways) of crashes, and as much as 40% of fatal crashes on the New York State highway (Rayner, Flatley and Horne, 1998; Flatley and Rayner, 1995

Around 20% of fatal road accidents involve driver fatigue. According to VicRoads Road Accident Facts Victoria, 1998 Edition, about 30% of severe single vehicle crashes in rural areas involve the driver being fatigued.

A study conducted by the Adelaide Centre for Sleep Research concluded:

The U.S. National Highway Traffic Safety Administration (NHTSA) estimates that approximately 100,000 police-reported crashes annually (about 1.5% of all crashes) involve drowsiness/fatigue as a principal causal factor. A conservative estimate of related fatalities is 1,500 annually or 4% of all traffic crash fatalities. At least 71,000 people are injured in fall-asleep crashes each year. NHTSA estimates these crashes represent $12.5 billion in monetary losses each year.

Drowsiness/fatigue may play a role in crashes attributed to other causes. About one million crashes annually — one-sixth of all crashes — are thought to be produced by driver inattention/lapses. Sleep deprivation and fatigue make such lapses of attention more likely to occur.

In a 1999 NSF poll, 62% of all adults surveyed reported driving a car or other vehicle while feeling drowsy in the prior year. Twenty-seven percent reported that they had, at some time, dozed off while driving. Twenty-three percent of adults stated that they know someone who experienced a fall-asleep crash within the past year.

In a 1996 postal survey of 9,000 male drivers in Britain, in which 51% responded (4,600), the drivers attributed 7% of their crashes in the previous three years to tiredness (sleepiness and/or fatigue).

At the 1995 National Truck Safety Summit driver fatigue was designated the number one priority for truck safety.

People tend to fall asleep more on high-speed, long, boring, rural highways. New York police estimate that 30% of all fatal crashes along the New York Thruway occurred because the driver fell asleep at the wheel.