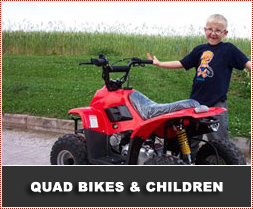 Much is being done to protect the younger generation from the dangers of underage driving – yet children are allowed to drive on all-terrain vehicles [ATV’s] / quad bikes without supervision and formal training.

In recent research in the US the rate of injury and death to children under 16 driving ATVs was described as being of “epidemic” proportions. With the rapid increase in sales of ATV’’s in South Africa, it is important to face the facts and design solutions to achieve greater road safety for the younger generation:

International research has indicated that:

All drivers of ATV’s should wear protective gear at all times. Apart from the prescribed protective gear such as helmets, goggles, face shields etc there are basic “ machine fit criteria” that could be followed.

These criteria include the following:

Parents often don’t perceive the risks associated with ATV’s. They need to equip themselves with objective information about the dangers associated with ATVs and to make informed decisions about whether or not an ATV is appropriate for their children. Much of the dangers can be averted by parental training and adult supervision over young drivers.

It is also recommended that parents pay close attention to the recommendations by the West Virginia University Extension Service when teaching a child the rules for ATV operation:

Quad Bike/ATV Safety and the Training of Riders

Introduction Technology has made it much easier for road users to travel and transact along their journeys. It is no longer necessary to travel with substantial amounts of cash to fill up along the route. Petrol and garage cards enable travellers to have more peace of mind that they would be able

Alco-Check is a social responsibility-driven company that supplies breathalysers throughout South Africa. With branches in Cape Town, Durban, Johannesburg and Pretoria, we aim to educate people and create awareness of alcohol consumption and the effects on blood alcohol content(BAC), we provide a tool