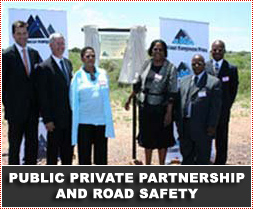 A 2002 World Health Organization report suggests that the number of traffic fatalities will be more than double over the next 15 years globally and traffic deaths will become the third largest cause of death globally. We are a part of this global village and these threats to life and limb is something that we all need to address as road safety is everyone’s concern.

The need for public private partnerships is not a new development but rather something that has been recognized by the Government and the Department of Transport much earlier.

On the 9th of May 1998 the Minister of Transport at the time, MAC Maharaj emphasized the need for government to follow the worldwide trend to use not only private sector money but also their planning, technical and management capability for the provision of services and infrastructure.

More recently government has confirmed that new public private partnerships have to be forged in order to make the resolve by government to reduce fatalities on our roads a reality as outlined in the National Road Safety Strategy 2006 onwards. These partnerships can contribute towards promoting efficient and competitive public service delivery. The theory is that such partnership operations can reach and service disadvantaged populations while minimizing cost to the government – shifting risk to the private sector and enabling national, provincial and municipal governments to concentrate on their core missions.

At the heart of the public private partnership approach is the concept that better value for money can be achieved through the utilization of private sector enterprise due to the enhanced scope for innovation and by allocating the risk to the party best able to manage it.

Public private partnerships provide opportunities for businesses to participate in enhancing road safety and to share their vision and expertise in a variety of road safety strategies.

At the opening of the NEPAD Stakeholders Dialogue, President Mbeki stated that the private sector has a key role to play in the future development of the continent. He said “we need increased participation by the private sector in the NEPAD programmes such as infrastructure development, the diversification of production and in the drive to add value to products. In this regard, public private partnerships are essential if NEPAD is to succeed.”

The ability of Government to reduce the road accident toll will also depend on building up local partnerships networks, ensuring quality planning and implementation of road safety interventions, including monitoring and evaluation of implemented strategies.

The Department of Transport has embarked on more than 20 major road projects (including toll roads) worth more than R5 billion over two years – many of which have brought substantial benefits to local communities. Partnerships are also practical examples of how infrastructure provision is used as a means of creating jobs and stimulating the growth of small and medium enterprises. On the N1 Toll Road project between Warmbaths and Pietersburg, 4400 people were employed, 1900 people were trained and 59 small and medium enterprises created.

Government / Department of Transport have emphasized the need for public private partnerships at the following events:

The Director General of Transport emphasized at this event that “For traffic safety to be a success, the support of the general public and all different sectors of society is indispensable. Social support is important in order to ensure that the different sectors in society and government join forces to combat low levels of safety.”

The 2010 World Cup will provide much further motivation for and focus on public private partnerships. From national to local government level we have already seen an acknowledgement of the need to combine expertise and to maximize spending on infrastructure and technology.

It is evident from these statistics that no single drive from Government, the Department of Transport or the RTMC would have a significant impact without participation by the private sector. At present several companies are actively involved in road safety efforts and deserve recognition for these efforts.

The public private partnership should however stretch much further than merely financial sponsorships. The public sector needs to recognize weaknesses and seek to benefit from the expertise in the private sector in fields such as information technology, communication, consulting, engineering, private healthcare, emergency services, etc.