Confiscation of Vehicles of Drunk Drivers 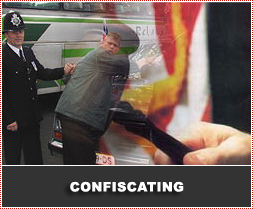 A recent judgment by the Cape High Court has opened the door for the Asset Forfeiture Unit to confiscate the cars of drunken drivers and speedsters.

This has been much debated in legal circles and the Arrive Alive Campaign has received praise from members of the public who have seen enough trauma caused by the offenders.

For an understanding of the new measures, it is important to focus on the history behind these drastic measures and the legislation that enabled the National Prosecuting Authority to approach the court for the preservation order.

Background on the Incidence of Drunken Driving in South Africa

It is alleged that the driver of the vehicle [the respondent] was involved in several offences for which he is being prosecuted. These include:

The respondent also faces a charge of speeding. On 10 April 2004 his vehicle was photographed by means of speed detection apparatus, whilst travelling at 189km/h in an area where the speed limit was 120km/h.

“Instrumentality” is defined as “any property which is concerned in the commission or suspected commission of an offence at any time before or after the commencement of this Act, whether committed within the Republic or elsewhere.”

The National Director of Public Prosecutions submitted that the vehicle played a role / was instrumental in a reasonably direct sense in the commission of the offence of driving under the influence of alcohol, in defeating or obstructing the course of justice, in reckless or negligent driving as well as driving at excessive speed.

As the vehicle was leased from another owner [second respondent] and the Act makes provision for the creation of a so-called “innocent owner “defense” the legal owner would be afforded the opportunity to prove that it neither knew nor had reasonable grounds to suspect that the vehicle would be used as an instrumentality of a schedule 1 offence – and thereby have its' interests excluded from the forfeiture order.

The vehicle will remain the property of the institution providing the finance until the last instalment has been paid.What would be forfeited in such a case is the right of the respondent to " possess, enjoy and use" the vehicle.

Practical implications of the order

Wendy Watson, the Director of Land Transport Regulation at the Department of Transport has indicated that this course of action is aimed especially at habitual offenders and the most dangerous drivers who continue to drink and drive or travel at very high speeds in spite of being caught. The Asset Forfeiture Unit, together with Arrive Alive and enforcement agencies have identified many dangerous drivers who are repeat offenders over the past few months.

The Supreme Court of Appeal (SCA) decided on the 9th of November 2006 that a motor vehicle that is driven under the influence of liquor or while the level of alcohol in the driver’s blood exceeds the prescribed limit, is liable to be forfeited to the State in terms of the Prevention of Organised Crime Act.

It was held that the Act is not restricted to organized crime, but extends to ordinary crimes committed by individuals and that a motor vehicle constitutes an ‘instrumentality’ of the offences referred to above and is thus capable of being forfeited to the State in terms of the Act.

The court also held, however, that a vehicle driven in those conditions is not liable to forfeiture in every case. It held that a court may only order the vehicle to be forfeited if such an order would be proportional to the particular offence, which requires a court to weigh the particular circumstances in which an order for forfeiture is sought.

The confiscation of vehicles is not unique to South Africa. There is a worldwide realization that stronger enforcement is required to rid the roads of repeat offenders. For more information on the situation elsewhere also visit:

States in the USA must also enact and enforce repeat intoxicated driver laws to avoid the transfer of Federal-aid highway funds in instances of non-compliance.
[ Repeat Intoxicated Driver Laws]