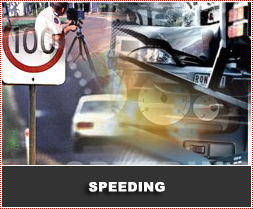 Speeding can be defined as exceeding the posted speed limit and driving too fast for conditions. Unfortunately, many people do not view obeying speed limits as an important way to avoid crashes. Speeding is regarded as a factor in nearly one-third of all fatal crashes.

The important factors to consider are the following:

The Arrive Alive Campaign is aware that the public needs to be made more aware of the dangers of speeding. If speeding is to be combatted more effectively, we would have to devote increased resources to better enforcement, including more law officers to patrol the roads and we must support technological advances such as video cameras [“photo radar”] to target aggressive speeding drivers. We would also have to consider the effective development of speed calming devices in road engineering especially in specific rural areas.

Many speed related crash reduction efforts try to utilize the 5E’s strategy namely Education, Enforcement, Empowerment, Engineering and Evaluation. It is however the drivers responsibility to obey the traffic laws and to be sure that all passengers are safely seated and belted. Speed is a critical risk factor for road traffic injuries. As average traffic speed increases, so too does the likelihood of a crash. If a crash does happen, the risk of death and serious injury is greater at higher speeds, especially for pedestrians, cyclists and motorcyclists. Male and young drivers are more likely to speed, while other factors likely to influence speed include alcohol, road layout, traffic density and weather conditions.

Ease of mobility must not be at the expense of safety. Easy, quick and relatively low-cost travel is important for people’s work and personal lives, and at a national level, it is important for economic growth. Safety must lie at the heart of speed management (bringing road users to a safe speed using an integrated set of measures), yet governments and those involved in speed management at local level face challenges when balancing mobility and safety.

However, shifting the emphasis towards safety is at the heart of the “Safe System” approach – a system that underpins successful speed management in high-performing road safety countries such as Sweden.

Within this framework, the speed limit on a section of road takes account of safety, mobility and environmental considerations, as well as the impact of the speed on the quality of life for people living along the road.

Where motorized traffic mixes with pedestrians, cyclists, and moped riders, the speed limit must be under 30 km/h. This is due to the vulnerability of these road users at increasing speed: an adult pedestrian has less than a 20% chance of dying if struck by a car at less than 50 km/h but almost a 60% risk of dying if hit at 80 km/h. The type of crash that is likely in a particular situation is also an indicator for determining a safe speed. For example, on roads where front impacts with other road users are possible (such as on non-divided rural roads) a “safe speed” will be lower than on motorways, where head on collisions crashes are unlikely.

Setting and enforcing national speed limits is an important step in reducing speed. Most countries set a limited number of general national speed limits, for example for motorways, urban, and rural roads, with some providing further divisions (for example between “urban residential” and “urban industrial” areas). Of the 180 participating countries, 97 set maximum urban speed limits of less than or equal to 50 km/h, in line with best practice.

Although the definition of urban may vary between countries, given that these areas usually involve a high concentration of pedestrians and cyclists, speeds above 50 km/h would be unsafe. Many countries that set an urban speed limit of 50 km/h have exceptions to allow this speed to be increased in specific circumstances – for example on urban ring roads.

Enforcement of speed limits is essential to make them truly effective.

Indeed, where countries have changed their national speed limits but have taken little supporting action to enforce them, there have been very limited benefits. This assessment found that only 27 countries (15%] of participating countries) rate their enforcement of speed laws as “good” (8 or above on a scale of 0 to 10), suggesting that without ongoing and visible enforcement of speed limit legislation, the potential impact of speed legislation to save lives globally remains vastly unattained.

Local authorities need legislative power to reduce national speed limits where necessary A safe speed is one tailored to fit the road’s function and traffic and is particularly important on roads with no median barrier and more mixing of traffic and road user types.

So, while a country may set a national rural speed limit of 90 km/h, local authorities may need to reduce this on a particular stretch of road that is dangerously curved, or cuts through a residential community.

It is important that local authorities not only have the legal authority to reduce national limits, but also to manage local speeds according to particular road situations and in conjunction with other traffic calming or speed management policies. Such legal authority may be spelled out within the road traffic act itself, or in regulations, decrees or other legal documents beyond those relating to road traffic.

However, this survey shows that only 88 of the 180 participating countries allow local authorities to reduce national speed limits.

Additionally, only 47 countries, representing approximately 950 million people, meet both legislative criteria for best practice on urban speed management – a national urban maximum speed limit of 50 km/h, and local authority power to reduce this limit to ensure safe speeds locally. Of these 47 countries, 24 are high-income, suggesting that speed management has a long way to go in the countries where it is most needed.

For an investigation on speeding in South Africa and some of the results of recent data, visit the following links: