Legal Duties after a Collision and Road Crash 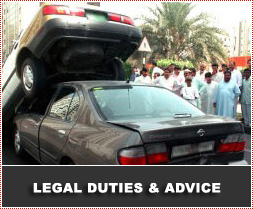 A road crash happens fast and is a traumatic experience. It may leave you shaken, injured and unable to think clearly. For those reasons, it’s a good idea to review what to do if you’re in a road accident now.

Then, if you’re ever involved in a crash, it will be easier to respond correctly.

The law clearly sets out your duties if you are involved in, or contribute to, an accident on a public road in which any other person is killed or injured or suffers damage in respect of any property or animal. You must do the following:

Stopping the Vehicle to Assist

A driver who fails to stop after an accident when required to do so by law is liable to be prosecuted and, if convicted, fined up to R36000, or sent to prison for up to nine years, or both. If you can prove that you did not stop because you were not aware of the accident, you may avoid prosecution. If not, the courts will presume that you were aware of the accident.

You do not have to stop or report an accident if, for example, you collide with a tree and damage only your car and injure nobody or only yourself. If, however, you damage someone else's property - a vehicle, say, or an electric-light standard - you must stop and then report the incident at the nearest police station.

Don’t make the mistake of assuming it’s okay not to stop after an accident that isn’t serious. Failing to pull over counts as a “hit and run” and is a criminal offence, even if nobody is killed or seriously injured in the accident.

Once you’ve pulled over, put on your hazard lights to alert other drivers. It’s also a good idea to position an emergency triangle about 45 metres from the accident site to warn oncoming traffic.

Immediately after pulling over, assess the situation and call emergency services. Give your name, number, location and details of the accident, including the number of people injured, if any.

It’s a good idea to have these emergency numbers stored on your cell phone:

Calling 112 from a cell phone will put you through to a call centre, starting with an automated menu. The centre categorises emergency calls and routes them to appropriate responders.

By law, you must call the police to the scene of a crash if anyone has been seriously injured or killed. You should also call the police if you suspect any of the drivers involved in the accident are under the influence of alcohol or drugs.

After a road accident, it’s legally required that you provide your information to anyone who has reasonable grounds to request it. This includes other drivers involved in the crash and law enforcement officers. If a police officer is present, you’ll be required to show your license if you were driving.

Refrain from consuming any Alcohol!!

Stan Bezuidenhout from Crash Guys International provided a short checklist for what you should photograph with your cell phone, immediately after an accident:

This list is inclusive of the minimum evidence that would best serve the most basic requirements to be of benefit in any insurance claim, dispute or trial.

This list may be distributed as long as it is shared completely, as it appears, without any changes and with acknowledgement of the author and copyright holder.

What NOT to Do and Say!

Be careful of what you say at the scene of a road crash. With emotions and adrenaline running high, people often say things after an accident that they come to regret. Stay calm and say less rather than more. Even an offhand or innocent remark may be recorded in police statements and insurance claims and used against you under cross-examination.

What type of things should you avoid saying?

First, don’t admit you were to blame and definitely don’t offer any payment that could be construed as a bribe. Most insurers prohibit statements of admission, offer, promise, payment or indemnity.

“I will pay for the damages” or “I’m sure my insurance will take care of it” This could be seen as an admission of fault. Similarly, don’t agree to settle anything without the help of an attorney.

“I didn’t see you” or “I was on the phone”. These are examples of admissions against interest, which are admissible in court and may be used against you.

“I don’t need medical help. I’m fine.” This kind of statement can be an admission against interest. Also, it can take a few days for injuries to reveal themselves. Endorphins and adrenaline may initially mask the symptoms of injury.

Do not make any statements admitting fault as this may affect the investigation and authorisation of your claim.

A few more Do’s to Consider:

Reporting Duties to the Police

Claiming damages for a road crash

An attorney who specialises in RAF claims can determine if you have a claim, guide you through the claims process, assist you in gathering evidence and medical opinions to support the claim and represent you in legal proceedings.

The alarming frequency of car accidents happening on our South African roads is the strongest reason for car insurance. But car insurance is really only helpful after the accident, right? Wrong. Car insurers have been upping their game to offer consumers more value, and this includes being there for you from the very moment that you need it. As in, from the point of prang, they’ll leap in to help you handle the situation.

Never risk having to battle another party in contesting a financial claim after a road crash - Insure your Vehicle!

Even with all their help, it’s far better to have an idea of what to do after a car accident so that you’re not completely helpless!

Identification of a Patient