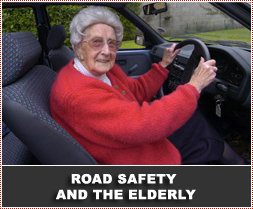 Road Safety Authorities and non-government organizations place much focus on road safety and the younger generation - but often neglect the older road users. The group of elderly road users is getting increasingly larger and our road safety strategies should pay more attention to the possibilities and limitations of this group of road users.

In the coming decades, the number of elderly road users will increase considerably and so too their fatality rate in traffic. When involved in traffic crashes the risk of severe injury is considerably higher because of their physical vulnerability.
We need to discuss road safety and the risks to older people and recommend measures to enhance the safety of these road users!

Who do we regard as elderly/old road users?

Factors contributing to a risk level of older road users

Why does the older age group pose a significant road safety risk? Are there specific factors that impact on their safety? The road safety of elderly road users is determined by two factors: functional limitations and physical vulnerability.

Functional limitations are those factors that determine why they are more likely to be involved in a crash. These can be summarized as follows:

The increased physical vulnerability brought about by ageing contributes to crashes having a worse outcome for the elderly.

Characteristics of driving behaviour from the elderly / Older Road User

Letting go of their vehicles is often a traumatic experience for the elderly - seen as a farewell to part of their social lives. Not all the elderly pose a disproportional danger to other road users. They are more often severely injured themselves (killed or hospitalized) in a collision with other motorists than that they, as a motorist, cause severe injury to another road user (drivers or other types of road user).

The elderly often compensate through their driving behaviour:

What advice can we offer to our elderly road users?

Older pedestrian crashes, on the other hand, tend to occur on a regular trip, often close to home or at shopping centres or recreational venues. Crash patterns identified are:

May we not neglect our elderly road users and strive to address their road safety needs!