v=speed
tr=driver reaction time (varies from 2,5 to 2,8sec)
g=acceleration of gravity
f=coefficient of friction between tyres and pavement (varies with speed – for wet, glazed asphalt it varies from about 0,45 at a speed of 10km/h to 0,2 at a speed of about 70km/h)
G=average grade

The above distances depend on whether a vehicle goes into a skid or not – distances increase drastically when vehicles go into a skid.

The type of vehicle (vehicle mass – together with speed relating to momentum) also plays a role – for example : in emergency situations a light passenger car doing in the order of 100km/h needs about 60m to stop, a truck weighing less than 5t would require about 70m and a truck weighing between 5t and 10t would require in the order of 80-90m (both doing about 100km/h). (In all these cases vehicles do not go into a skid situation and distances given do not include driver observation and decision distances).

Speed plays a major role in driver observation, recognition, decision and reaction time. In the case of a hazard or an incident on the road, the driver of a medium size motorcar driving at a speed of 120 km/h will need a total distance of about 227 metres from the point of observing a hazard and taking evasive action until the vehicle comes to a standstill. For a driver driving at a speed of 180 km/h this distance more than doubles to about 480 metres. Information on the total observation, recognition, decision and reaction distances required for various sized motorcars and speeds on a flat section of road are given in the graph below. 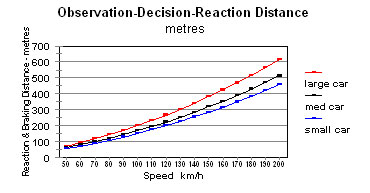