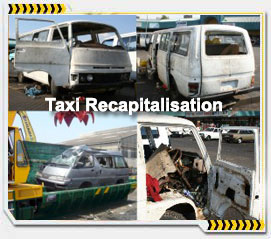 The taxi industry by far transports the biggest number of passengers on any given day, compared to both rail and bus. As part of Government’s intervention to improve the effectiveness of the industry since its de-regulation, The Taxi Recapitalisation Programme (TRP) is on course:

1. What is the Taxi Recapitalisastion Programme (TRP)?

The TRP is an intervention by Government to bring about safe, effective, reliable, affordable and accessible taxi operations by introducing New Taxi Vehicles (NTVs) designed to undertake public transport functions in the taxi industry.

2. What are the benefits of the TRP for the Taxi industry?

TRP is not only about scrapping old taxi vehicles but also about how best operators can be assisted to benefit constructively in the industry through empowerment.

TRP is about extending subsidized contract by exploring mechanisms on how the industry can benefit from the subsidy system. 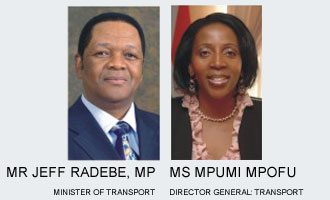 3.1 Who qualifies to take part and benefit from the TRP?

3.2 What are the basic requirements for participation in the TRP:

3.3 What differentiates the NTVs from current taxis?

Through the introduction of the NTVs in the TRP, Government has for the first time prescribed “compulsory safety and other requirements”  to protect passengers, operators, pedestrians, motorists and other road users. The compulsory requirements are also meant to ensure passenger comfort.

3.4 Through the TRP, Government has ensured the following: 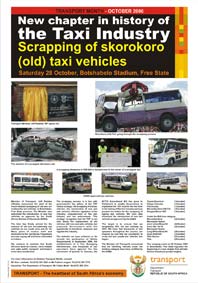 3.5 Renewal of the old taxi fleet

The NTVs will come in three categories, namely:

3.6 What do the compulsory safety and other requirements entail?

The compulsory safety and other requirements for the taxis through the TRP are as follows:

Government has also published regulations on colour coding. All mini and midi buses operating in terms of an operating license shall be branded according:

3.8 Will the NTVs be affordable?

Government, SANTACO, Top Six, the National Taxi Alliance (NTA), banks and vehicle manufacturers will continue to interact so that they come up with affordable prices for the NTVs. There are many competing manufacturers and that will lead to the reduction of the NTV prices and also reduce the cost of capital. Government has further allocated an amount of R7.7 billion which will be used for the setting up of the Taxi Scrapping Administrator and for payment of the R50 000 scrapping allowance.

There are minibuses (18 – 35) taxi vehicles in the market that already meet some of the safety standards and other requirements. However some of these minibuses are still to meet and comply with outstanding safety requirements currently being concluded by the SABS. The current minibus sector is to a greater extent to meet and comply with a number of the safety and other requirements. New taxi vehicles to be launched on 28 October 2006 at Botshabelo Stadium, Free State Province.

3.10 What process must I follow to recapitalise my taxi?

a) How and where do I go to recapitalize my taxi?

The process of the current taxi is twofold

Operators who wish to reduce their fleet by partly exiting and partly remaining also qualify to take part in this process. For example if an operator has five taxis and s/he wants to surrender only two taxi vehicles and their permits but remain in the industry to continue doing business with the other three legally operating taxis, such an operator would then qualify for immediate R100,000 for the two taxis to be surrendered and recapitialise the other three during the next phase of the roll out of the TRP.

At the next phase of the roll out the operator would still qualify to recapatilise the remaining three taxis by obtaining R50 000 per taxi to enable him/her to use the money as deposit for the three New Taxi Vehicles (NTVs).

The second process is the ultimate Recapitalisation of the taxis belonging to operators who wish to replace their taxis with NTVs and using the R50, 000 per legal taxi as deposits to purchase the NTV

The first process (voluntary exit) is to be preceded by the registration of “intention to exit”.

Applicants are NOT EXPECTED TO HAND IN THEIR TAXI VEHICLES AND PERMITS/OLSs YET, but are rather expected to go and register their intention to completely or partly exit. Applicants will then be called upon at a later stage to bring in their vehicles for actual scrapping once all the necessary supporting documents have been checked and verified. The taxi vehicles to be handed-in shall be checked and confirmed for authenticity.

Vehicles that are suspected of being stolen and or tampered with shall be handed over to the South African Police Services for investigation. During this period on processing of the application shall be undertaken until the SAPS conclude its investigation and duly communicate its findings to the Department of Transport.

b) Where do I go to register my voluntary exit?

Forms are available at the Offices of the local Provincial Operating Licensing Boards and can be submitted at no cost.

The scrapping incentive will be paid directly into the bank account of the successful applicant once the necessary processes have been completed.

d) The TSA will amongst other things undertake the following functions:

e) Will the scrapping facility be based in one province only?

No the handing-in of old taxi vehicles, application for the scrapping incentive, and application processing, will be done in all provinces and applicants do not have to travel from their respective provinces to a national office.

f) What will happen to operators who will totally ignore the TRP?

g) Who can be contacted for further information and or clarity on these matters?

Any Department of Transport (Provincial or National) can be contacted for further information.