Road Safety and Avoiding Animals on the Road 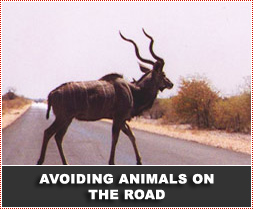 Road users have to be attentive to more than the risks posed by other road users. They also have to be alert to the dangers of animals on the road. As urban areas continue to push outward and displace animals from their natural habitats and as traffic continues to increase every year, collisions between cars and the animals seem an almost inevitable consequence.

As we drive outside our urban areas we often see roadkill - animals that have been killed by passing traffic. We might even have had the unfortunate experience of striking a large animal ourselves. Road collisions kill and maim wildlife, pets and humans, and result in millions of rand in insurance claims. These incidents are however mostly under-reported. When a driver swerves or stops to avoid hitting an animal, the resulting mishap is mostly not recorded as a collision with an animal.

Animal distractions and risks are brought about by a variety of animals, from small cats, dogs and even birds to the large cattle, donkeys, and antelope such as kudu. Even insects have been recorded to take their toll!

There is no foolproof way to keep animals away from the roads. Hoofed mammals that stand high on their legs, such as cattle, horses and antelope such as kudu pose the most danger to vehicle occupants. If they are hit they can roll onto the bonnet and into the windshield or roof, resulting in extensive damage and serious or fatal injury. Due to their height, their eyes are above most headlight beams.

There are a few suggestions that could assist in protecting motorists:

Even though the behaviour of animals might be unpredictable, there is much safer to be found in preventative measures and community involvement. It is required that farmers and landowners adequately protect road users by looking after fences and gates.

The following suggestions will enhance safety:

Despite all the interesting and scientific solutions it is important to remember that there is no substitute for the defensive driver. Road users should at all times be vigilant - expect the unexpected!