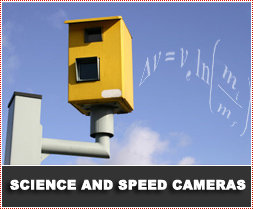 In an urban 60 km/h speed limit environment ... the relative risk of being involved in a casualty crash ... was found to approximately double for each 5 km/h increase in free travelling speed.

– There is a strong statistical relationship between speed and crash rates.

2.1 Cameras as a Deterrent

The study monitored the number and severity of casualties over time and compared crashes to areas that did not have heightened speed camera activity.

All types of speed enforcement examined have led to at least some positive impact on either casualty crash frequency, crash severity or driver behaviour. In most cases, this effect has been significant.”

3.1 Scientific basis for the strategic directions of the safety camera programs in South Africa

Signed, fixed speed cameras are a cost-effective means of addressing specific areas where crashes occur and the use of unsigned, mobile cameras reduce speeding across the entire road network rather than just where a camera is known to be located.

3.2 Comparing the Travelling Speeds of Cases and Controls
Figure 1 shows the speed distribution of the vehicles involved in casualty crashes (cases) and Figure 2 shows the corresponding information for non-crash involved vehicles (controls). 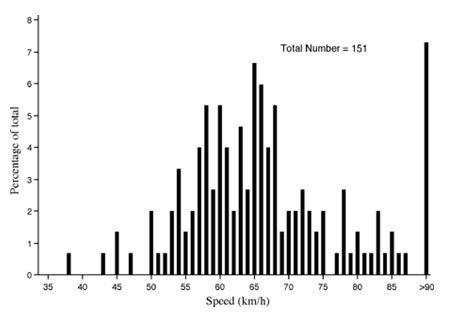 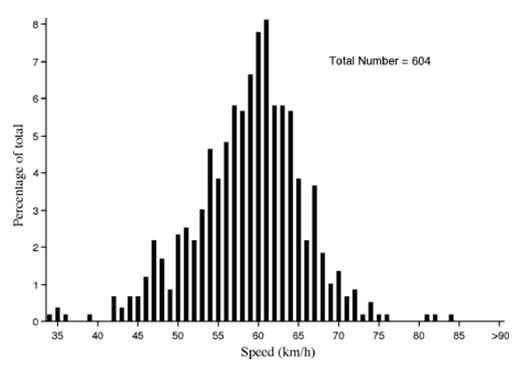 Cars involved in casualty crashes (cases) were generally travelling faster than cars that were not involved in a crash (controls):

Table 4.2
Percentage of Vehicles
Travelling Above the Given Speeds

4.1 Travelling Speed and the Relative Risk of Involvement in a Casualty Crash

In this section we present the risk of involvement in a casualty crash at specified speeds relative to the risk for drivers travelling at 60 km/h. The speeds of the cases (the crash-involved drivers) and the controls (those not involved in a crash) are grouped in 5 km/h intervals as shown in Table 3.

The relative risk (R.R.) of involvement in a casualty crash at a travelling speed of 70 km/h compared to 60 km/h is calculated as follows:

It is possible to calculate the range of values that probably includes the 'real' relative risk (Gart, 1962) and the limits of this range are shown in Table 3. For the above example, the 95% confidence limits are 2.12 and 8.17. This means that the 'real' relative risk has a 95% probability of being within the range from 2.12 to 8.17. If, as here, the interval between the confidence limits does not include 1.00 then it can be said that the risk of involvement in a casualty crash at the specified travelling speed (here it is 70 km/h) is statistically significantly different from the risk at a travelling speed of 60 km/h.

None of the travelling speeds below 60 km/h was shown to be associated with a risk of involvement in a casualty crash that was statistically significantly different from the risk at 60 km/h. There was some indication that the risk decreased somewhat to 50 km/h and then increased to greater than one at 40 km/h but the confidence intervals show that this trend could well have arisen purely from random variation.

The information in Table 3 is presented graphically in Figure 3. The representation of the speed data in 5 km/h intervals provides a clear picture of the change in risk by speed. 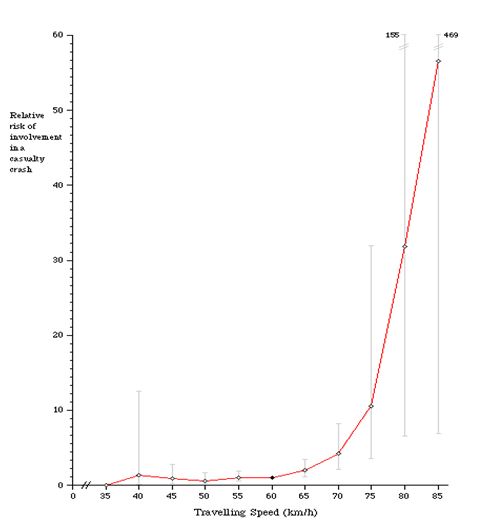 Note: Relative risk at 60 km/h set at 1.00.
95 per cent confidence intervals are shown by the vertical lines.

Disregarding the last two categories in Table 4 because of the single cases, the crash types associated with the highest free travelling speeds were:

Additional information about the effects of travelling speed was obtained by calculating what the hypothetical outcome for the vehicles and those people injured in the case crashes would have been if the case vehicle had been travelling at a different speed.

4.4 Injuries Sustained in the Crashes

In each of the 148 crashes in this study, at least one person was injured sufficiently to require transport to a hospital. In total, 237 persons received an injury from these crashes.
Table 5 shows the outcome, mostly in terms of the level of treatment, of the injured persons in the crashes investigated (based on police report information). Those cases listed under "Transported by ambulance" were known to have been transported to hospital but it was not listed on the police report whether they were treated in the casualty department and discharged or admitted to the hospital for longer term treatment.

For each crash, five hypothetical speed reduction scenarios were applied to the free travelling speed of the case vehicle (or to multiple case vehicles if appropriate).

The results are expressed in terms of four factors:

Note that the percentage reduction in the number of persons injured is an underestimate since most of the crashes that would still occur under a hypothetical lower travelling speed situation would have occurred at a lower speed than was actually the case and would therefore have had a lower chance of causing injury. For example, some of the cases under the hypothetical scenarios would have had an impact speed of only a few km/h so, even though the crash would still have taken place, it is almost certain that no injury would have resulted. Also, some of the drivers who lost control of the case vehicle would probably not have done so under a hypothetical lower travelling speed situation and in some cases the other vehicle may not have misjudged the case vehicle's speed and created a crash situation.

The 5 km/h reduction scenario had much less effect on the elimination of crashes (15%) but still reduced the average crash energy level experienced by the injured parties in those crashes that still would have occurred by 24 per cent.

5.1 Estimated Effect of Eliminating Speeding Vehicles Based on Risk Estimates

An alternative estimate of the effect of the elimination of speeding (limit 60 km/h with total compliance) can be derived from the data in Table 3. The Table shows that 93 (62%) of the case vehicles were speeding (speed greater than the 58-62 km/h band). If none of the case vehicles had been speeding (ie. their relative risk was reduced to 1.0), fewer casualty crashes would have occurred. Working back from the relative risk figures, we would expect that 50 per cent of the crashes in the 65 km/h band might have been avoided (or been reduced from a casualty crash to one not requiring ambulance transport), rising to 98 per cent of the 85 km/h crashes, and virtually all of the crashes involving vehicles above 87 km/h.

By applying this method to all of the cases exceeding 62 km/h (Table 8) it can be seen that the elimination of speeding would be expected to reduce free travelling speed casualty crashes by about 46 per cent.

Munden JM.  The relationship between a driver’s speed and his accident rate.  Berkshire:  Transport and Research Laboratory.

Corbett, C. (1995). Road traffic offending and the introduction of speed cameras in England:  The first self report survey. Accident Analysis and Prevention, 27(3), 345-354.