Too many people die daily in firearm accidents. The Arrive Alive website is well aware of the many firearm incidents to which our paramedics have to respond  –and has decided to share safety advice and suggestions with our road users.

With safety from crime a very important consideration for South Africans, many have become firearm owners and are transporting firearms in their vehicles. We would like to assist in creating safety awareness about firearms both when on and away from our roads!

We would like to include some rules and recommendations that can be applied when handling firearms. The purpose of this section is to eliminate or minimize the risks of unintentional death, injury or damage caused by improper handling of firearms.

The Fundamentals of Firearm Safety

Before offering safety suggestions about firearm usage, we need to investigate firearm accidents and identify the contributing factors to these accidents:

*Faulty handling of the firearm. A handler may execute the steps of procedures such as loading, firing and emptying in the wrong order or omit steps of the procedures.

* Misunderstandings about a firearm's status. For instance, a handler may think the safety is on when it is not. A round of ammunition may be in the chamber or in the magazine while the handler thinks it is empty. A handler may receive a firearm and assume it is in a certain state without checking whether that assumption is true.

* Mechanical failures. Wear, faulty assembly, damage or faulty design of the firearm can cause it not to function as intended. For instance, a safety may have been worn down to a point where it is no longer functioning. Broken or worn parts in the trigger, sear or hammer/striker may have given the firearm a "hair trigger" (a very sensitive trigger). A dented or bent body of the firearm may cause jams or premature discharge of ammunition. Sensitivity to impact may cause a firearm to discharge if dropped or struck against another object.

Safety Rules Related to the Operator/ Shooter and his Behaviour.

We should pay close attention to various aspects of safety. The operator is the most important component in the safety chain. The operator should adhere to the following safety rules:

Safety Rules Related to Your Target.

The handler should never operate the firearm without close attention to his target. Safety rules include: 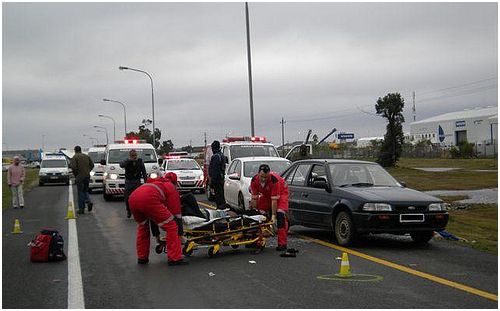 Safety Rules Related to Your Firearm.

Proper maintenance and care could prevent many accidents. Safety guidelines should include:

Firearms are generally only a danger when there is ammunition involved as well! Pay close attention to correct and safe ammunition!

Safety Rules Related to Your Firearm's Holster and Ammo Carrier.

Road users need to be very aware of how they carry and transport their firearms. We would like to emphasize the importance of the firearm holster in the process of transporting and safe carrying of your firearm:

Risks to carrying a firearm carried in that fashion are:

Firearms are dangerous even when it is not in your hands! Pay close attention to the safe storage of your firearm - When you are not using your firearm, you should insure that it is stored safely!

Measures designed to prevent unauthorized access to a defensive firearm by minors, or firearm theft, include:

Also consider "gun-proofing" your child by proper training, and by controlled and closely supervised access to firearms to reduce your child's natural unsatisfied curiosity about firearms.

Perhaps the best measure to enhance safety is proper training on firearm usage. Training is used to minimize the risk of accidents. If you are considering buying a firearm or already have one in the home, you may want to register for a safety class in your area.

Gun safety training seeks to instil a certain mindset and appropriate habits by following specific rules. The mindset is that firearms are inherently dangerous and must always be handled with care. Handlers are taught to treat firearms with respect for their destructive capabilities, and strongly discouraged from playing or toying with firearms, a common cause of accidents.

What do you need to know when transferring a firearm from one location to another or from one person to another?

When accepting a firearm from another person:

We would like to focus not only on the primary danger of being shot, but also secondary dangers threatening both the operator, bystanders and even the environment:

- Noise
When a firearm is discharged it emits a very loud noise, typically close to the handler's ears. This can cause temporary or permanent hearing damage such as tinnitus. Hearing protection is recommended to prevent this.

A firearm emits hot gases, powder, and other debris when discharged. Some weapons, such as semi-automatic and fully automatic firearms, typically eject spent cartridge casings at high speed. Casings are also dangerously hot when ejected. Any of these may hurt the handler or bystanders through burning or impact damage. Because eyes are particularly vulnerable to this type of damage, eye protection is recommended to prevent this.

In recent years the toxic effects of ammunition and firearm cleaning agents have been highlighted. Avoid polluting the environment!!

Gun safety dictates that a firearm should never be handled while under the influence of alcohol or drugs, or legal prescription or over-the-counter drugs. Since such substances may affect a person's judgment even after consuming relatively small amounts, zero tolerance is advocated by gun safety teachers.

Exhaustion can also constitute a form of impairment, as reaction time, cognitive processing and sensory perception are all impaired by sleep deprivation and/or physical exhaustion. Gun safety therefore discourages using firearms when exhausted.

Children who are generally considered too young to be allowed to handle firearms at all can be taught a different set of rules:

Most firearms are equipped with a very important safety device. This is usually located near the firearm's action. Common types include the slide, lever, wing, hammer (half cock position), trigger block and button safeties.
Depending on the firearm, a safety's on or off position may be etched next to the safety mechanism. Some firearms use a button safety that is red in color when the safety is off and they are ready to be fired. Consult the owner's manual if you are unsure about how your firearm's safety works or how to tell when the safety is in the on or off position! As a general rule, always keep your safety on until ready to fire your gun!

Most safeties block the trigger but not necessarily the gun's firing mechanism. A hard blow in the right place can still discharge a firearm. Safeties also wear out and break. Never depend on a safety to prevent a gun from firing!

We have discussed the importance of firearm maintenance. Unfortunately too many accidents occur when operators with the best of attentions are negligent when cleaning their firearms.

Proper cleaning of your firearm helps ensure it operates in a safe and reliable manner. Firearms should be cleaned after every use and after they have been stored for a long period of time.

Safety advice when Cleaning Firearms include: