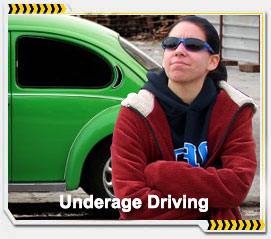 The facts about underage driving:

Why do underage drivers pose such a significant risk?

Not only could these accidents lead to loss of life, but also severe physical and emotional scars on the survivors. Many parents are not aware that insurance companies are only obliged to honor claims from sober and licensed drivers – and they will have to compensate for the damage caused by underage drivers…

The most important advice would be to teach responsibility by way of example. If parents drive with caution and obey the laws of the road – their children will also have more respect for traffic laws and for those who travel our roads!