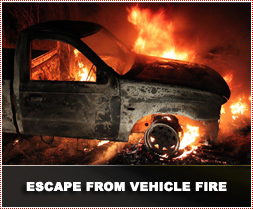 Tens of thousands of lives have been lost globally in the last few decades due to car entrapment deaths. In this section we will analyze the threat of vehicle fires and provide advice on how to act in these emergencies.

Data from the United States reveals the importance of awareness about this threat to safety on the road:

Nature of the threat:

While explosions from car fires are rare, the true danger is the toxic fumes. Motor vehicles are made of many synthetic materials that emit harmful and deadly gases when they burn. A main by-product of fires is a lethal concentration of carbon monoxide, which is odourless, colourless and tasteless gas.

Fire can cause fatal or depilating burn injuries. A vehicle fire can generate heat upwards of 1,500 F. Flames in vehicles can often shoot out distances of 10 feet or more. Parts of the vehicle can burst because of heat, shooting debris great distances.  Bumper and hatchback door unit, two-piece tire rims, magnesium wheels, drive shafts, grease seals, axle, and engine parts, all can become lethal shrapnel. Fires may also cause air bags to deploy.

Hazardous materials such as battery acid can cause injury even without burning.

Cause of Vehicle Fires

The National Fire Protection Association (NFPA) in the US reports that about one fifth of all fires reported are motor vehicle fires, and the majority of vehicle fires are not related to crashes. These fires do not seem to attract much attention or investigation, because they do not usually result in injury or property claims beyond the vehicle replacement cost.

Vehicle fires usually progress slowly in the early stages, allowing occupants time to escape injury. Injury or fatalities usually occur in cases where an occupant is asleep, disabled, intoxicated, or too young to escape.

Most vehicle fires start in the engine compartment. A motor vehicle contains many flammable materials, including flammable liquids like gasoline and oil as well as solid combustibles such as upholstery. Fuel leaks from ruptured fuel lines also can rapidly ignite.

Leakage of fuel, motor oil, transmission fluid, power steering fluid, brake fluid, or even coolant can lead to engine fires, and the leakage of a flammable or combustible liquid in an engine compartment results from some kind of failure. The failure may be a result of normal wear and tear, failure of a mechanic to make repairs safely, design failure which leads to rupture or abrasion of hoses or manufacturing defects in hoses, gaskets or fluid connections.

When a brand new vehicle (or one which has had very recent repairs) burns, failure of the manufacturer (or a mechanic) to safely tighten all fluid connections is the most likely cause.

Car batteries pose a fairly unique hazard - hydrogen gas evolved in the electrolysis reaction ignites readily in fire conditions and can result in an explosive dispersion of battery acid.

About 15 percent of motor vehicle fires originate in the passenger compartment. The main causes of these are electrical short circuits and cigarettes. 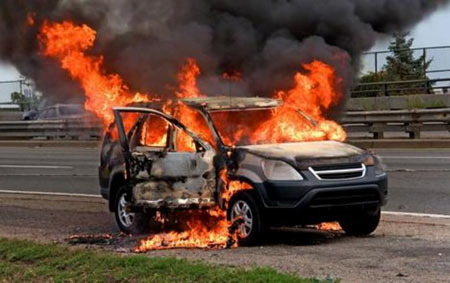 Advice when Vehicle is on Fire

In the automotive world, smoke does not necessarily mean fire. Depending on the age of the vehicle, it could be steam from the radiator, often caused by a broken fan belt or over-heated engine. The simple fact is if your vehicle is smoking or putting off odours, something's gone wrong. A burning car is a death trap. Smoke accumulates quickly within the sealed doors and windows and rising heat and the fire itself make a time bomb out of the gas tank. Escape from a burning car is a challenge that requires fast thinking and even faster acting.

Here are safety suggestions to follow when your vehicle is smoking/ on fire:

If in an accident and not possible to get out immediately:

Tools for Escaping from a Vehicle on Fire

Fire Fighters realise that in any life or death situation a person's chance for survival is greatest if they are able to successfully conduct a self-rescue. Getting trapped inside the car is a serious situation and could further lead to graver results.

It is often difficult after an accident to escape when a vehicle's doors are jammed or when a vehicle's rear doors are locked via the child safety locks. Car crashes often jam seatbelt buckles & brackets. Fact is that the bracket does not even have to jam to prevent you from safe escape.  If the vehicle is upside down, your own weight could prevent you from releasing the connection.

To prevent injuries and fatalities, road authorities recommend that vehicle owners should be equipped with auto escape tools. These simple tools could save lives, protect in case of emergencies and give peace of mind for travellers.

It is extremely difficult to break a car window with anything except a tool that is specially made to do the job. When you're trapped in your car…and it's on fire…and smoke is pouring in…you only have seconds to escape.

Escape from a vehicle submerged under water

How to handle an emergency