Driving with Lights on at Daytime 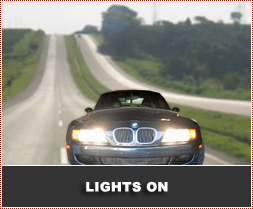 At the launch of the several Road Safety Campaigns, the Department of Transport has urged motorists to drive with their headlamps on during the day. Motorists were urged to keep the headlamps of vehicles on the dipped beam and demonstrate their commitment and support of the Arrive Alive's ‘Lights on the campaign.’

It is important to understand the merits behind this request. Several international studies have proven that the correct implementation of such a strategy could indeed assist in reducing deaths on the roads.

Even though circumstances and environmental conditions might differ the following international studies have provided noteworthy findings in countries where daytime running lights are used in vehicles:

Arguments in favour of the “Lights on” Campaign

Various studies have shown that “driving with lights on” can improve the noticeability and detectability of vehicles in the central and peripheral fields of view. Commitment to the “Lights on Campaign” could not only enhance visibility but also remind all motorists at all times of the dangers to road safety, and the measures that we need to take to avoid these dangers.