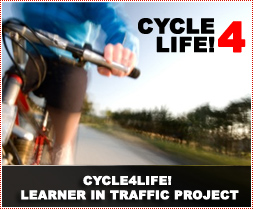 Education is a high priority on the Governments list, according to budget expenditure in South Africa.

Education in Road Safety is accepted by everyone as a high priority to reduce the carnage amongst all age group road users.

The CYCLE 4LIFE! Final competition with 112 out of 120 000 learners from 363 schools took place in the Northern Gauteng Province (Tshwane and Metsweding), participated at Metro Hall on 24 September 2010.

Department of Community Safety, Road Safety Promotion worked together with many role-players to contribute towards the new generation knowledge of Road Safety to be better road users and placed a special focus on Cycling safety!!