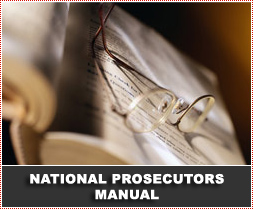 Amendments to Part 29 of the National Prosecutors Manual.

1. Guidelines issued by the Technical Committee for Standards and Procedures for Traffic Control and Traffic Control Equipment (TCSP) should be complied within all areas of jurisdiction. The guidelines relate to speed, drunken driving, overloading and red traffic signal prosecutions.  It also addresses the involvement of private companies in assisting with law enforcement functions.

2. In the prosecution of speeding offences a DPP may decline to authorize the use of specific traffic law enforcement measuring equipment if in his or her opinion, its use is rendered problematic by the road or other conditions.

3. If there is no expert witness available to testify about a particular device and to deal with the challenges with regard to its operation, the DPP may suspend or cancel authorization to use such a device.   The prosecutor should contact the manufacturer, supplier or distributor for information on expert witnesses.

4. A tolerance of 10 km/h must be allowed in all speeding cases before a prosecution is instituted.

5. The traffic authority must be instructed to inform traffic officers to make notes concerning additional details about what occurred during the incident on the back of their copy of the notice or other relevant documentation, to enable them to conclusively give evidence later.

6. Where an accused is not stopped and informed of the commission of an offence immediately, a section 341 notice must be posted to him or her no later than 30 calendar days after the offence was committed.

7. Where cameras are used for prosecution purposes and offenders are not immediately stopped after the commission of an offence, road traffic signs must be displayed in the general area of enforcement in question, to alert road users of possible camera prosecutions.

8. These directives should be brought to the attention of the local and provincial traffic authorities and municipal police services.

10. In respect of prosecutions for overloading the following guidelines apply:

a. The following tolerances must be allowed before a prosecution for overloading offences may be instituted:

ii. 2% on the permissible maximum  vehicle and combination mass loads as referred to in regulations 236 and 237, and the maximum mass allowed on a group of axles in terms of regulation 241 (bridge formula) of the Road Traffic Regulations, 2000

11. Representations may only be made in writing and the traffic authority or the prosecutor must respond to the representation in writing.