In South Africa we often refer to roundabouts as “traffic circles”. A roundabout is a type of circular intersection that reduces potential conflicts between vehicles and improves the efficiency of the intersection.

The advantages of a roundabout are: Step by step example: The graphic will provide better insight with regards to the process to follow:

To go straight on (taking the second exit)

To Turn Right (taking the last exit or third exit )

By applying some of this information and sharing this with colleagues and friends we might contribute towards reducing some of the road rage on our roads!

The rules for traffic circles in South Africa are as follows:

Slow down and give way to other vehicles that cross any Yield line before you do.

Proceed in a clockwise direction around the painted island, without driving on it.

In the words of the official legislation:

Indicates to the driver of a vehicle approaching a mini circle that he or she shall yield right of way to any vehicle which will cross any yield line at such junction before him or her and which, in the normal course of events, will cross the path of such driver's vehicle and that the driver shall move in a clockwise direction within such junction and attempt not to encroach on the mini-circle.

You must obey traffic circle rules at the roundabout.

In the words of the official legislation:

Indicates to the driver of a vehicle that he or she shall move in a clockwise direction at the junction ahead and he or she shall yield right of way to traffic approaching from the right, within the roundabout, where such vehicles are so close as to constitute a danger or potential danger.

The official regulations in South Africa leave a lot to be desired when it comes to the finer aspects of driving, and they do not in fact address the situation as described in the sketch provided (below). 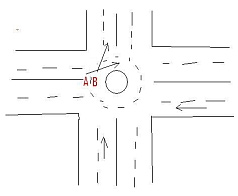 It is not clear from this sketch which of the two arrows in the approaching roads represents which of the vehicles.

Assuming that A came from the two-lane dual-carriageway on the right, and was travelling in the LH lane on approach to the roundabout, and B came from the lower road and approached the circle in the RH lane:

Assuming it was the other way round and A came from the bottom road, in the RH lane:
- A was entered the circle from the correct lane but somehow got into the outside lane once in the circle, which is wrong for the exit he wished to take.
- Also, A should have waited for B before entering the circle, and would therefore not have ended up in this situation.

Whichever way it happened, either or both of the vehicles ended up in the wrong lane within the circle and that is the cause of the problem.

Of course, this assumes a fairly small roundabout.

Have said that, when one gets in a fix such as this the norm would be for the vehicle that is ahead of the other vehicle to move forward and for the vehicle behind to allow it to get out of the way so that it can exit the circle. However, as both A and B are alongside each other, the Calgary rule would seem the most appropriate.

At the end of the day, no vehicle in a traffic circle should obstruct another's line of travel. So if there were any doubt at all, B should go around the island another time (or even two) and move into the LH lane when it is safe to do so, and then exit from that outer lane when it is safe to do so. (Of course, he would check mirrors and blind spots first, then if it is safe, use the left indicator, and all that other "good K53 stuff".

Driving the Roundabout / Traffic Circle safely with the dashboard camera