Travelling Speed and the Risk of Crash Involvement 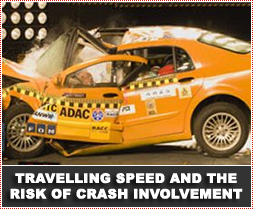 The aim of this study was to quantify the association between travelling speed and the risk of involvement in a casualty crash. The study were intended to predict the likely effects on injury and crash severity of lower travelling speeds in the cases investigated.

5.1 Travelling Speed and the Risk of Involvement in a Casualty Crash

As shown in Figure 4.3, we found that there was an exponential increase in the risk of involvement in a casualty crash with increasing travel speed above the legal urban area speed limit of 60 km/h.

5.1.1 Reasons for the Rate of Increase in Risk of Involvement in a Casualty Crash

Involvement in a crash is often a consequence of a large number of inter-related causal factors that cannot all be quantified after the event. This study was not designed to investigate the mechanisms by which increases in travelling speed lead to increases in crash risk but a number of possible mechanisms are apparent.

In most of the crashes included in this study the driver of the case vehicle attempted, clearly unsuccessfully, to avoid the crash by braking. One hundred and seven, or 71 per cent, of the 151 case vehicles skidded under emergency braking before the crash. Two of the 151 vehicles were equipped with antilock brakes but their drivers were among the 44 who were thought not to have braked, either because they did not have time to attempt any avoiding action or because they were not aware that a crash was imminent.

We refer here to "reaction distance" rather than the more common term "reaction time" because we find that it emphasizes the reasons why small differences in travelling speed can result in very large differences in impact speed. We have discussed this phenomenon at some length in a report on a previous study of the role of vehicle travelling speed in fatal pedestrian accidents (McLean et al, 1994).

In calculating the reaction distance we have assumed that the time taken by the driver to identify that a crash is likely, decide on avoiding action, and implement that action, is 1.5 seconds (the reasons for selecting 1.5 seconds are presented in McLean et al, 1994). In some cases it may have been less, in others more. (There were some cases in which the driver had no warning of the crash before the impact and hence no opportunity to react.) The reaction distance is therefore assumed to be that distance travelled by the vehicle in 1.5 seconds and so it is directly proportional to the travelling speed of the vehicle. At 60 km/h it is 25 meters; at 70 km/h, 29 meters.

Although it is not uncommon for drivers to claim that they swerved to attempt to avoid a collision, in practice any attempt at avoiding action almost invariably involves emergency braking. In the absence of antilock brakes, braking in an emergency from the speeds seen in this study results in the wheels locking and the vehicle skidding, even for highly skilled drivers. (An emergency situation in normal traffic is, by definition, unanticipated, unlike some apparently similar situations on the race track.) Skidding under emergency braking is accompanied by the loss of steering control and hence the loss of the ability to steer away from an object in the path of the vehicle.

Braking distance, from travelling speed to a standstill, is proportional to the square of the speed.  From 60 km/h (under the assumptions set out in Volume 2 of this report) the braking distance is 24 meters, from 70 km/h it is 31 meters.

When the reaction distance is added to the braking distance, it can be seen that from 60 km/h it requires 49 meters to stop in an emergency, whereas from 70 km/h 60 meters are needed (a 22% increase). Obviously, a driver travelling at 60 km/h will be involved in fewer crashes (avoiding those in the zone from 49 to 60 meters) than one travelling at 70 km/h.

In this study we recorded far greater differences in speed between some of the cases and the control cars than in the previous example and this is reflected in even more extreme differences in speed at the moment when the slower car has stopped under emergency braking. For example, if a car travelling at 100 km/h is overtaking a car travelling at 60 km/h at the moment when both drivers realize that they have to try to stop, when the slower car has stopped the faster car will still be travelling at 94 km/h.

Travelling Speed and Loss of Control

A number of cars involved in crashes in this study were travelling at very high speeds (greater than 90 km/h) when the driver lost control of the vehicle. This coupled with the total absence of any of the cars not involved in crashes travelling at these speeds, indicates that very high speeds are associated with extremely high risks of losing control of the vehicle and subsequent crashes and injuries.

It is likely that a driver of a vehicle that is travelling unusually fast may create dangerous situations. This can happen when another driver assumes that the approaching speeding car is travelling at about the same speed as other traffic on that road.

Some evidence that such a phenomenon exists was provided by the in-depth study of a representative sample of accidents conducted in Adelaide 20 years ago (McLean, Offler and Sandow, 1979). In 35 collisions at Stop sign controlled intersections it was concluded that only two resulted from a driver failing to observe the Stop sign. In the remaining cases a driver stopped at the sign and then moved off into the path of an approaching car on the through road. The drivers involved in all of the crashes in that study were routinely asked about any prior convictions for speeding in the previous five years. The results are shown in Table 5.1, where it can be seen that the drivers on the through roads were four times more likely to have reported a prior conviction for speeding than the drivers who were, in almost every case, moving off from a Stop sign.

A Combination of Factors Relate Travelling Speed to Crash Risk

The factors discussed here often have a cumulative, and probably a synergistic effect on the risk of involvement in a casualty crash. For example, a speeding vehicle is likely to have its speed misjudged by another driver, thereby creating a crash situation, in which the speeding vehicle will travel further during the reaction time of its driver, will lose less speed under emergency braking, and will crash at a comparatively greater speed with much greater crash energy.

It is worth noting that these factors are based mainly on physical and physiological principles that are not influenced by the skill, or lack thereof, of the driver of the speeding vehicle. This has two important implications. The first is that no driver can control the failure of other drivers to realize that a vehicle is approaching at a faster speed than experience has taught them to expect. The second is that if an "advanced" driver training course encourages a driver to believe that he or she has become more capable of controlling a car at speed (despite the fact that Newton's Laws of Motion are not affected by such tuition) it may in fact increase the likelihood that the course graduate will choose to travel faster than would otherwise be the case and thereby unwittingly create emergency situations of the type referred to here. Our results show that the risk of involvement in a casualty crash is twice as great at 65 km/h as it is at 60 km/h, and four times as great at 70 km/h. Increases in risk of such magnitude would appear to be sufficient to justify the elimination of the current practice of applying an enforcement tolerance to speed limits, or at least a substantial reduction in such a tolerance.

Although the risk increases rapidly with increasing speed, the contribution of speeding to crash causation is much greater at speeds below, say, 75 km/h than it might appear from the risk curve in Figure 4.3. In this study, more than two thirds of the crashes involving speeding cars occurred at a speed that was below 75 km/h, because more drivers are travelling in the speed range from 61 to 74 km/h than above the latter speed.

A large proportion of the injuries sustained in crashes in this study would have been avoided had the case vehicles been travelling at a slower speed. The change in velocity in the crash (delta V) and the severity of the injuries that would still have occurred would have been markedly reduced. Even modest reductions in travelling speeds can have a profound beneficial effect on crash and injury frequency.

Despite the considerable magnitude of the predicted benefits, shown in Table 4.7, it is probable that they are still considerable underestimates. This is because we have only considered the effect of reduced travelling speed on the elimination of crashes in the collision configuration that we actually observed. Many of the hypothetical crashes would not have happened because the driver would not have lost control at a lower speed, the other vehicle may not have misjudged the case vehicle's speed and created a crash situation, and the lowered impact speeds of the crashes that did still happen would have produced fewer and less severe injuries.

This is borne out by the alternative method of estimating the effect of the elimination of speeding among the sample of crashes by working back from the risk estimates (Section 4.2.4). Using this method it was found that 46 per cent of the free travelling speed crashes examined here would not have resulted in a casualty if none of the vehicles had been speeding.

The relationships between enforcement effort and speeds