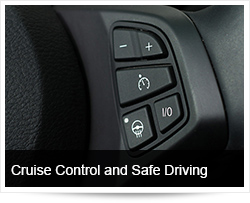 Advances in automotive engineering and technology provide us with both safety and comfort features in modern day vehicles. One such feature is our ability to put the vehicle in cruise control. With driver error blamed for so many cars crashes it is important that we are fully aware of how to use these features and devices correctly and safely.

There has been quite a bit of debate on the benefits and risks associated with driving a vehicle with cruise control. Engaging cruise control in any road situation that is less than optimal is ill-advised – but what are these conditions and how can we benefit from cruise control without compromising on safety?

There have been a few urban legends in the online media about vehicles with cruise control “aquaplaning”. There is however no inherent factor in the cruise control mechanism itself that could lead to a hydroplaning vehicle speeding up and flying through the air.

In this section, we would like to take a closer look at cruise control and find the truth about driving with cruise control. We need to know how cruise control functions, what the benefits and risks are and how and when to use or disengage speed control!

What is Cruise Control?

Cruise control can be used to automatically control the speed in your vehicle without keeping your foot on the accelerator. You are able to manage the speed of your car with your fingertips whilst still keeping control of the vehicle through the steering and braking. Cruise control was developed as a comfort and convenience system rather than a safety system

The basic features of most cruise control systems are:

These buttons are used to engage and disengage your cruise control system. When you tap the “on” button, your car understands that you’re about to engage the system in order to cruise at a specific speed. The “off” button will disengage the cruise control. Turning off cruise control is as simple as applying the brake. Even a gentle tap of the brake pedal will shut cruise control off – requiring you to control the speed using your gas pedal again.

This button tells the vehicle to maintain the speed at which you are currently driving. As such, if you hit the “set” button your vehicle will maintain that speed once you remove your foot from the gas pedal. In most cruise control equipped cars, tapping the “accelerate” button will cause the vehicle to speed up by 1km/h.

Most cars’ cruise control systems will allow you to return to your previously programmed speed by pressing ‘Resume’.

Advanced Cruise Control (ACC), also known as adaptive or intelligent cruise control, is an addition to conventional cruise control systems. It not only maintains the driver-set vehicle speed, but also adjusts the vehicle's speed to that of a preceding vehicle, and helps to maintain a pre-selected headway time to the vehicle ahead.  Rather than maintaining speed in isolation, a vehicle with adaptive cruise control can actually react to the traffic around it.

Advanced cruise control uses a frontal radar/laser sensor to detect vehicles in front and subsequently adjusts the vehicle's speed and headway by controlling fuel flow or by slightly breaking. An adaptive cruise control-equipped vehicle can automatically slow down when the car ahead does; without driver intervention. It also means that if the driver changes lanes to an open one, the car automatically resumes speed. Most adaptive cruise control systems also allow the driver to set the following distance to the limits of the system's range, which is usually about 150m. While the majority of adaptive cruise control systems use radar, there are a few that use lidar or even cameras. Regardless of the sensor system involved, all systems provide essentially the same functionality.

Active braking carried out by ACC can usually reach up to maximally 30% of the vehicle's maximum deceleration. When a stronger deceleration is needed, the driver is warned by an auditory signal. Once the preceding, slower vehicle has moved out of the lane, the vehicle's speed will return to the driver-set cruise speed.

The only real drawback to adaptive cruise control is that it is more expensive than conventional cruise control. It is found more and more in the luxury car brands today! Benefits of Cruise Control for the Driver

Cruise control may be intimidating for drivers who have never used it, as when they take their foot off the accelerator and the car doesn’t slow down, they feel like they are no longer in control of the car.  Those who are familiar with how cruise control works may find the following benefits:

What are the Risks of Using Cruise Control?

With increased comfort, there are however also risks that we need to be aware of! Driver error may lead to vehicle crashes if we use cruise control incorrectly and in the wrong driving conditions. Challenging road conditions may increase the risks for the driver using cruise control.

The driver should always be in full control of the movement of his vehicle and an error of judgement on his part cannot be merely blamed on the cruise control feature!

Risks can be summarized as follows: When not to use Cruise Control

We would like to advise that cruise control by avoided in the following circumstances: As with other vehicle components we can expect to see continued improvements and advances in features and technology. Communication between vehicles and between vehicle and roadside is considered the technology that will make a whole new generation of vehicle control systems possible.

Cooperative Advanced Cruise Control with communication between a series of successive ACC-equipped vehicles in the same lane and/or communication with roadside systems will lead to vehicles exchanging information on their position, speed and deceleration. This may benefit road safety as the ACC system can optimize its speed support and drivers can get early warnings of braking or of slow vehicles ahead.

We will continue to assist road users with a better understanding of our vehicles and how we can make informed decisions to improve the safety for all on our roads!!

Recognition to info from