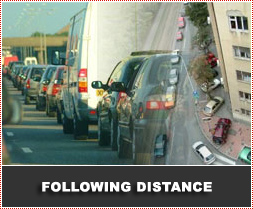 Most rear-end collisions are caused when drivers do not obey sufficient following distances. This is also known as Tailgating- often regarded as a form of aggressive driving behaviour. In South Africa, with the high prevalence of road rage, tailgating might contribute towards retaliation by other drivers and initiate instances of road rage.

Adequate following distances enable drivers to adjust in emergency situations and bring their vehicles to a stop safely – time that could mean the difference between life and death.

A driver should stay alert at all times as abrupt stopping could be caused by a variety of unforeseen events such as:

Most International road safety campaigns refer to the “2" or "3" Second Rule” as a guideline for safe following distances. A point on the road is noted, 2-3 seconds are counted, and if that point is still visible then there's probably enough following distance.

The 2-3 Second Rule is applied as follows:

The 2-3 Second Rule is only the advised measure when driving conditions are ideal. This should be seen as a bare minimum and should be adjusted to at least 5-6 Seconds in the following situations:

Always drive defensively and focus on your safety and the safety of those around you. Don't allow yourself to be tailgated—change lanes or adjust your speed to encourage tailgaters to pass you.

If someone cuts into your space, take a deep breath, simply back off a little and regain enough space –what counts is your safety!