Some researchers and experts state that the term road rage has become common vernacular to describe any displays of anger while driving, although such displays are also referred to as “angry or aggressive driving”.

Angry or aggressive driving may range from mild displays of anger, such as following too closely on another driver's bumper, to more serious forms of violence, such as physical assault and vehicular homicide.

At this point, it seems as if any expression of anger e.g. waving of arms, staring and the like are being seen as road rage.

I differ from this.

A closer analysis of the term “road rage” renders the following:

Road rage per se is not seen as and or has not been classified as a separate psychiatric illness. In fact, most psychiatrists call it IED - Intermittent Explosive Disorder which is characterized by extreme expressions of anger up to the point of uncontrollable rage which is disproportionate to the situation. 5 to 7 % of the population suffers from this disorder and because it is associated with lower serotonin turnover rates in the brain, a combination of psychotherapy and medication is indicated for treatment.

Genuine road rage personalities also experience rage in other situations in their lives and this is congruent with the IED diagnosis.

I, therefore, believe that when ordinary road users who do not suffer from IED express anger on the road, it should be seen as normal behaviour i.e. angry or aggressive driving, and not road rage per se. Real road rage which leads to the rage like behaviours as described above is at the extreme end of angry and aggressive driving: 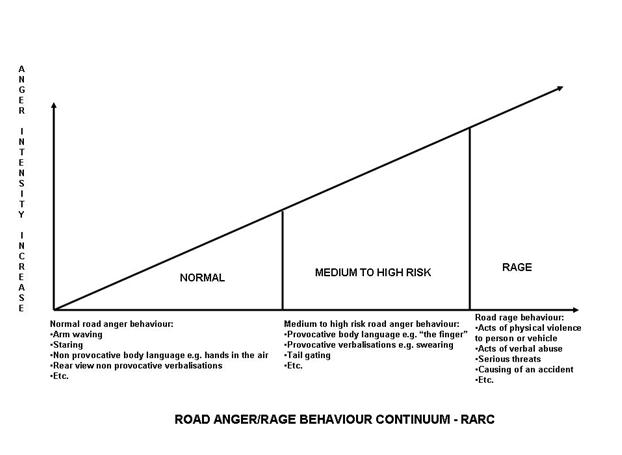 Although I argue that e.g. anger expressions such as hand waving and staring on the road is normal human behaviour, I have to caution that self-control should be exercised as any anger provoked situation can quickly get out of hand and normal docile people can experience an acute episode of IED. One does not know the emotional state of the other person in the other car. Exercise self-control and restraint and do not get involved in an angry and aggressive driving incident.

Motorbike/ Motorcycle Safety through the Eyes of the Instructor

Sharing the road with bikers - How do we avoid the rage?