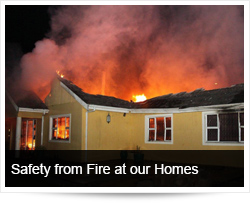 Emergency personnel have to respond to fires at homes and informal settlements across South Africa. In the bitterly cold winter weather, the risk of injury from fire significantly increases. We received safety information from both ER24 and the KZN Emergency services on how to protect ourselves from these fires and would like to share this on the Arrive Alive website as well!

The magnitude of the Threat of House Fires

The threat of house fires in South Africa was recently best highlighted by Patrick Kulati, Chief Executive Officer, Household Energy Safety Association of South Africa (HESASA). We would like to quote:

“Burns are among the most devastating of all injuries, with outcomes spanning the spectrum from physical impairments and disfigurement, to emotional and mental consequences. Even though injury due to burns is largely preventable, Africa carries an extraordinary burden of fire-related injuries. It is estimated that over a million patients are burned annually on the African continent, with 18 per cent of hospital admissions and six to ten per cent of mortality being burn-related.

In South Africa, a Medical Research Council report estimates that each year 3.2 per cent (1 600 000) of the country’s population will suffer from burn injuries, with the vast majority being from poorer communities. This high incidence is driven by negative impact factors including the influx of people to urban areas, haphazard urban development, overcrowding, inadequate electrification of homes in low-income communities, paraffin and bio-mass fuels used as the primary energy sources, and lack of effective preventative and education programmes

House Fires as a threat to the Safety of Children

Young children are particularly vulnerable, with death as a result of burn injuries claiming approximately 1 300 young lives each year. This concentration of burn mortality and injury among infants and toddlers occurs more frequently among very young black children below the age of three. Incidents of burn injury thereafter decrease until adolescence when burn mortality rates start to increase once older children become exposed to a wider range of high-risk activities such as cooking and lighting fires for morning and evening meals - both of which are activities common for older children in low-income settings.

Older children also spend an increasing amount of time with other children, older siblings and adults outside the home. This widening social network exposes them to risks posed by open fires initiated for heating and cooking and managing heating appliances and heated appliances or utensils."

What can we do to protect ourselves and to prevent fires at home?

It is not to say that every aspect of the home/business is a potential fire hazard, but it is advised to maintain a high index of suspicion when it comes to any form of electrical appliance, gas and open heat source being used.

Sources of Fire: What are causing these fires?

The most probable sources of a potential fire inside the home could come from any of the following, but is not limited to these few that are mentioned:

Most of these though would need to be accelerated by another source, for example, a roll of toilet tissue near a heater grill may ignite and start a fire. It is therefore very important to keep the area around any of these potential fire hazards mentioned above clear. Don’t leave any heater/heated appliance or open-flame burning while you leave the room.

Synthetic materials are widely used in household furniture. This material is highly flammable and will burn quickly once set alight. Keep open flames or embers away from foam matrasses, stuffed couches, curtains and carpets. These usually also cover a wide surface area and will be the cause of other maybe less-flammable objects to catch alight. Here are some do’s and don’ts when it comes to a fire possibly breaking out in your house:

Unfortunately, having a smoke detector and alarm in each room of the house is not common practice in South Africa but it should be encouraged. These somewhat simple devices are inexpensive and are easy to install. Have them checked and make sure that the batteries are kept charged.

A general rule to follow is to stay as far away from an uncontrolled open flame as possible. Winter fires in KZN and fires in rural areas

As winter approaches KZN Emergency Medical Services, sees an increase in the number of cases responded to that involve fires, burns, smoke inhalation, and accidental ingestion of fuels.

Although not all cases are the same and advice cannot cover all aspects of fire prevention these are several points that can be adhered to that can minimize the risk of fires starting and spreading.

Many people rely on candles and lanterns to provide light, the major risk is that these light sources have an open flame, which poses a fire risk if it is knocked over, or if something falls against it.

When using candles or lanterns, the following basic precautions can be taken:

Be very cautious of fuels (paraffin, jell used in stoves and lanterns) used in lanterns and jell stoves etc.

What to do if a fire breaks out How to respond after a fire

Despite there being many aspects of fire safety these are a few basic concepts that can help prevent the start and spread of fires, which can not only cause burns but also severe complications from inhaling the smoke produced by fires, which can cause injury can even death. Safety from Fire at the Workplace/ Business