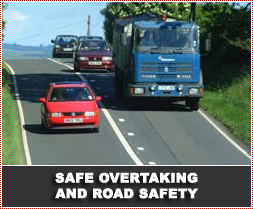 Introduction and threat to Road Safety

The seemingly simple manoeuvre of overtaking/ passing other vehicles accounts for a high rate of fatalities on South African roads. Passing stationary vehicles is a rather simple movement and does not present too many problems for most drivers. Overtaking moving vehicles is a different matter and requires skill, experience and practice because hazards are moving and the situation is constantly changing. When poorly executed, the passing procedure can quickly turn a few seconds on the wrong side of the road into a nightmare.

But why is overtaking more complicated than the driver might foresee?

Overtaking in a car demands several skills, driving techniques variable conditions. These include a clear vision of the road ahead, and knowledge and understanding of other vehicles that might be affected – approaching vehicles from the front, trailing vehicles and the ones surrounding the vehicle to overtake. It requires correct perception and able application of mind over the machine. It also involves judgment of speed and distance along with the judicious use of various car accessories like the rear view and side mirrors, transmission, steering wheel, and the braking system. It also requires a good awareness of the vehicle you are driving.

Threats to safe overtaking include a lack of familiarity with the geography and the ability of the vehicle the driver is accustomed to. When the vehicle is heavily loaded with passengers and luggage this increases the risk of error in driver judgement.

The piece of road that you choose for overtaking must be free of junctions. Be alert to road markings indicating possible junctions. A vehicle emerging from a junction ahead may not be able to see you. If a vehicle does emerge from a junction ahead of you while you are performing an overtaking manoeuvre then the danger of an accident increases sharply. The farther you may identify slower moving vehicles ahead prior to overtaking the better.

You need a straight stretch of road that is long enough that you can move out, overtake the slower vehicle, and return to a normal driving position. Keep in mind that if the road is straight and allows you to increase speed, it would be so for oncoming traffic as well and they might also have increased their speed!  Oncoming traffic has to be taken into consideration before overtaking, even the possibility of a car coming from around a bend.

The best road for overtaking will allow you greater visibility to see that there are no blockages ahead.

Where not to Overtake:

It is best not to consider overtaking at these spots:

In the above cases, it is better to avoid overtaking and rather to enjoy a slow and safe drive.

The Stages of Overtaking

The overtaking manoeuvre can be explained with reference to 3 stages:

1. Asking the question – Should I overtake?

Any driving movement can be considered with reference to the questions “Is it safe, legal and convenient?” A decision to overtake should start with the question "Do I really need to overtake"?

There is often very little advantage to be gained for the risk taken!

Only after answering “YES” to the following questions should you start to overtake:

2. Positioning the vehicle in “following position”

When you make the decision to overtake you should consider that this may be the last decision you will ever make. For this reason, it is essential that you get it right first time, every time. You will first have to position the vehicle in such a way that it allows you the opportunity to carefully consider your decision.

This is the position from where you might not be able to overtake at that moment but allowing you to follow the vehicle in front safely while giving time to gather more information. Once in this position, you need to consider what you can see, what you can't see and what you can reasonably expect to happen, in the near, middle and far distances as well as behind and at the sides.

This thought process will address the following questions:

3. Getting ready in “Overtaking Position”

The overtaking position is closer to the vehicle in front than the 'following position'. This shortens the distance you need to travel while alerting the driver in front that you intend to overtake. You should not stay in this position for long as you will have less time to react if the vehicle in front suddenly slows down. If the overtaking opportunity diminishes due to a change in circumstances, then you should adopt the 'following position' and increase the following distance.

It is important not to follow too closely to the vehicle in front. By holding back a safe distance you have additional time to gain speed before you’re on the wrong side of the road – meaning less time over the line.

A decent following distance dramatically increases visibility, an essential component of safe overtaking. As a general rule the larger the vehicle in front, the further back you should be so that your vision doesn't become restricted.

If you’re too close you can’t see ahead, and when you do get on the wrong side of the road, you’ll have little chance to change your mind without jamming on the anchors. It is harder to stop an accelerating vehicle.

The best thing about the following distance is that should something take you by surprise, you’ll have enough time to move back to your lane. Remember to use your mirror should you need to slip back into your lane in case the car behind has also decided to pass.

From this overtaking position, it is important to use the indicators. By using your right indicator shortly before passing and leaving it on for the entire manoeuvre, you not only make the car you’re passing aware of your intentions but to the car behind – just in case they were also about to pass you.

It is advised to travel with your low beam lights on. This will increase your visibility to oncoming traffic. At night, select high beam once you’ve cleared the car in front (assuming there is no one ahead of them).

4. Overtaking the Vehicle in Front

Before overtaking you need to interpret all the information and identify the opportunity when you have sufficient space and time to overtake safely. Before changing position, you should once again observe in front and to the back. As a general rule, move out to the offside position without significantly increasing your speed. Fast acceleration and unnecessary speeding are dangerous just before overtaking. If in case you do accelerate, the distance required for safe overtaking reduces rapidly and could result in an accident.

By slowly accelerating you will have a good view of conditions ahead without committing to overtaking. If you decide that overtaking isn't an option at this point, then you can safely return to your own side of the road.

By now, you should have the car set up to make your pass. By having the car already in a lower gear your engine speed is already up meaning you don’t have to wait for kick down and can begin accelerating when the chance arrives. If you are certain that you have selected a safe place for overtaking then go for it with commitment! As you move completely into the right lane accelerate as hard as you can – the less time spent on the wrong side of the road the better.

Stay central in the lane, make sure you pass with sufficient room to the slower car but by the same token don’t get to close to the shoulder – contact with either can have dire consequences.

While overtaking, make sure that you maintain a safe distance with the vehicle ahead. This will help you drive your car in flow with the moving traffic. If there is more than one vehicle in front of you, only overtake multiple vehicles when convinced that you have enough room and speed to do so – constantly reassess the manoeuvre as you’re making it.

To get back into your lane, lift off the throttle slightly and indicate left. Do not suddenly slow down, others might also be overtaking and you do not want to pose a risk to them or the vehicle behind. Remember you’ll have some pace on and backing off the acceleration slightly will assist your vehicle’s steering. Once you are safely in the left lane again, cancel your indicator and resume a safe speed. As a general guide, you should not return to your lane until you can see in your interior mirror that you have safely passed the other vehicle.

Don’t forget to be courteous, wave a little thanks if you can and don’t slow down to frustrate the car you’ve just passed. A little patience and courtesy can make the drive safer for everyone.

When being overtaken yourself and in case there are approaching vehicles, slow down a little to let the other driver pass by safely.

Overtaking at night is considered to be the most hazardous due to low visibility and dip in the concentration of the driver. Here are some tips for overtaking safely on night drives:

If you have made a driver error, remember that flashing your lights will not move an oncoming vehicle out of the way. Rather take evasive action like slowing and/or identifying a suitable escape route.

Overtaking is not something to be done without caution. You do not overtake to impress passengers or as an expression of rage on the road. The Rule of thumb is easy - If unsure about overtaking, then DON'T!