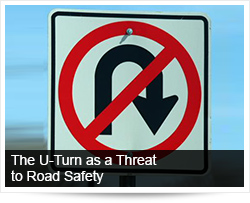 The U-Turn remains one of the most dangerous driver manoeuvres on roads worldwide. Paramedics respond daily to severe trauma from crashes that could have been prevented had it not been for the hasty decision to make a U-turn in traffic.

We all know U-turns are illegal most of the time - drivers are putting their own lives and the lives of other road users at serious risk when doing so at the wrong place and in the incorrect manner. In this section we want to focus on the U-Turn in an attempt to create awareness that could prevent many further crashes.

Why is the U-turn such a dangerous driving manoeuvre?

The consequences of an accident caused by U-turns are often fatal. It is an unexpected manoeuvre and usually does not allow time for the faster moving vehicle to change course and avoid an accident.

The U-turn requires a street wide enough for the driver to complete the manoeuvre. The U-turn is especially risky because the driver needs to cross lanes of traffic to complete the manoeuvre. Run-under crashes, where a vehicle runs under a truck turning across a road, are some of the most devastating crashes. Where trucks do not have the prescribed reflective materials and tape required for greater visibility, this threat is increased.

What does the Law stipulate?

Whether you regard it as safe to make a U-turn at a specific location does not matter if the law stipulates that it is illegal! The first question when considering a driving manoeuvre is to ask – “Is it legal?”

Just because there is not a No U-turn road sign displayed to indicate that a U-turn is illegal, does not mean that U-turns are permitted. Other factors such as road markings, a painted island, traffic flow, and more, can also make a U-turn an illegal manoeuvre. You can expect to find it illegal on most roads at the following locations;

The Road Traffic Act in South Africa has specific legislation making it illegal to make a U-Turn on a highway.

by means of an intervening space or by a physical barrier or dividing section so constructed as to impede vehicular traffic, no person shall drive a vehicle upon such public road except upon the left hand roadway, unless directed or permitted by an appropriate road traffic sign or a traffic officer to use another roadway.

(2) No person shall drive a vehicle on, over, across or within any

dividing space, barrier or section referred to in subregulation (1), except through a constructed intersection: Provided that no person shall so drive through such constructed intersection where such driving is prohibited by an appropriate road traffic sign or by a traffic officer: Provided further that the provisions of this subregulation shall not apply to a traffic officer in the performance of his or her duties. Painted Island
The official rules for these road markings per the SA National Road Traffic Act: How can we avoid the U-Turn?

Making a U-turn is not an acceptable driving technique and should only be performed when legal and then only as a last option. There may however be much safer options when you find yourself heading the wrong way. It should not be necessary to inconvenience other drivers or place anyone at risk by making U-turns.

Below are two methods drivers can use to help get back on course instead of making a U-turn:

It is much safer to turn away from the road you are travelling on at a turn-off, to make the turn there and then head back to the busy road, using traffic signs at intersections!

Performing a safe turn-off and then re-entering the traffic safely out of harm’s way will only add a minute or two to your travel time.

If a U-Turn is legal, how should it be performed safely?

A U-Turn is a dangerous manoeuvre yet every driver has done a U-turn at some points in his/her driving life. When legally permitted it should only be performed with proper consideration to vehicle positioning, turning radius, oncoming vehicles, and the width of the roadway.

Never underestimate the skill required to do a U-turn especially in difficult traffic situations. Where is the best place to make a U-Turn?

It is always best to take a turn-off away from the busy and faster traffic. To find a safe location for the U-turn consider the following:

How should I make a U-Turn?

If You HAVE to make a U-turn, we would like to advise the following: Warning to Other drivers

We would like to extend a word of caution as well to other drivers who are heading in the right direction, not having to make a U-Turn!

When approaching a vehicle parked at the side of the road, slow down and be cautious – expect the unexpected. We need to remain alert to the eventuality and risks of the vehicle ahead changing direction without indicating its intention!

A U-Turn is sometimes described not only as a dangerous but also a selfish manoeuvre. Do not correct your own mistake on the road by endangering the life and limb of other road users!

Remember to be considerate to other drivers, be careful and obey the rules of the road! If you must do a U-Turn - Do it carefully. Drive safely and Arrive Alive!