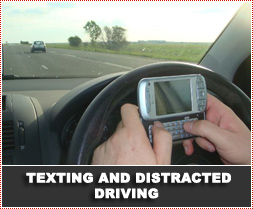 Distracted driving is described as an epidemic sweeping our roads. This topic is receiving much attention internationally and we would like to discuss in this section of the Arrive Alive website the global impact and the risks of texting and driving!

It has been revealed that distracted driving in the US has claimed thousands of lives and injured a half-million people during 2008. In the past, there has been a debate whether communicating from a vehicle might be a manageable risk - today, with the dramatic increase in the use of hand-held devices it is accepted that one method of communicating - texting- has the potential of creating a true crash epidemic!

Vehicle manufacturers have joined the call to ban drivers from text messaging with cell phones and other hand-held devices. The wireless industry including cellphone manufacturers, carriers, and some Internet companies have expressed the belief that texting "is incompatible with safe driving." It is estimated that there were more than 1 trillion text messages sent and received on wireless devices last year, including cell phones and smartphones.

At Government level in the US, the Obama Administration and Congress have addressed texting and distracted driving and all government employees are now banned from texting while driving whenever they are on the job, driving a federal vehicle, or using a government-supplied cell phone. This executive order affects nearly 4.5 million employees across the US, including postal workers and military personnel.

The simple truth is that roads are already dangerous enough with many existing threats to road safety! When we add cell phones and text messages to existing road risks, we are taking this beyond anything we should be dealing with on the roads. A study recently released by the Michigan State Medical Society claims that texting while driving makes driving six times more dangerous.

It is difficult to accurately document vehicle crashes caused by driver distractions, especially those distractions caused by texting. The last thing an accident victim might confess is that his texting caused the accident...

Most of the research on texting and driving is done in vehicle simulated driving conditions. Drivers are tested with motion sensors and computer graphics creating realistic motorway routes.

Some tests done in simulators suggest that talking on a phone, no matter how it's done, sharply elevates the risk of an accident. Researchers studying brain imaging documented that listening alone reduces the amount of brain activity associated with driving by 37%.

According to the US Department of Transportation, there were at least 515,000 injuries and 5,870 fatalities in the US in 2008 as a result of distracted driving-these numbers are taken from police reports, so the actual numbers could be quite a bit higher.

Even though there might not be sufficient statistics on how many people are driving and texting, there is enough information to say that texting shouldn't be permitted while driving!

Why is texting such a threat to road safety?

Drivers generally understand that drink-driving is a serious risk, but have less of an understanding of the dangers of texting. Those who are aware of the impairment to their driving are not aware of how great this impairment is. The Transport Research Laboratory found that motorists who use their mobile phone to send text messages while on the road dramatically increase the likelihood of a collision.

Studies have suggested that texting while driving is riskier than driving under the influence of alcohol or drugs. A combination of factors leads to impairments of reaction time and vehicle control which places the driver at greater risk than having consumed alcohol and getting behind the steering wheel.

But what are these risks?

It is important to consider the effect of texting as a driver distraction especially with a focus on our younger drivers. Teenage drivers are a particular risk group considering that according to research surveys the average U.S. mobile teen now sends or receives an average of 2,899 text messages per month, with many of these texts sent and read from behind the wheel!

Research on Texting as part of Distracted Driving

Most of the research on texting as driver distraction is from the US, and we would like to share some of these findings:

Measures to prevent Texting and Driving

There is little doubt that texting is the riskiest of driver distractions. But how do we prevent this risk from escalating?

The four-minute video, produced by local police in Gwent, Wales, has gone viral, attracting more than 1.5 million views on YouTube alone. YouTube has restricted viewings to those over 18 because of the bloody, graphic nature of the video. It has also required people to register before viewing it, although the video has been posted at the Gwent police Web site and elsewhere without restrictions. 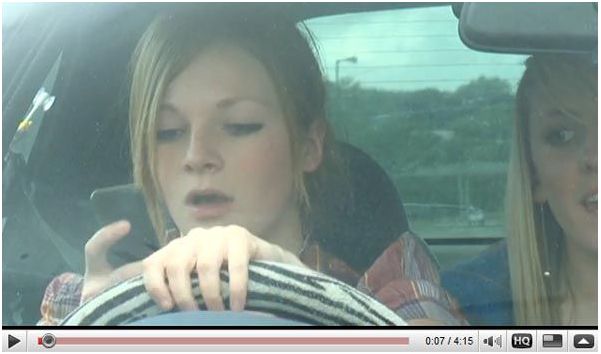 In a statement on its site, the Gwent police department said it is hoping the video can be used in schools across the U.K. to deter texting while driving. The Gwent police helped facilitate the filming of the video, including the auditions of 300 teenagers from Wales, "because we want to stop ALL drivers, but particularly young and new ones, from causing accidents," the statement said.

Despite the criticism, some psychologists see a valuable place for dramatic presentations like this graphic video produced by police in Wales, arguing that such tools can have an impact in educational settings, especially on young drivers. Parents who choose not to expose their kids to the video should find ways to deliver the message some other way-and hope that popular figures whom kids take more seriously deliver it as well.

Texting while driving is a difficult offence to enforce and prosecute. Despite it being illegal for a motorist to use a handheld phone behind the wheel, the RAC Foundation said that nearly half of the British drivers aged between 18 and 24 admitted to texting on the roads. Yet only 144,000 people were prosecuted for using their mobile while driving last year.

In the UK the Department for Transport said: “Driving and mobile phones don’t mix. That is why we increased the penalty for illegally using a mobile when driving to three penalty points and a £60 fine and have run hard-hitting campaigns to remind drivers of the dangers of using a phone in any way by encouraging them to ‘Switch off before you drive off’.”

Legislation has been changed so that motorists who cause a fatal accident while using a mobile phone can be jailed for up to five years. Previously the maximum punishment for similar crimes was a £5,000 fine and points on the driver’s licence.
It is expected that other countries will follow the example of stricter enforcement and law changes to address the risks of texting and driver distraction.

Can more technology assist in addressing these risks? Some road safety experts favour more laws banning texting while driving, while others tend to favour technology that disables wireless service in a moving vehicle.

Automakers and their suppliers are working on systems that will allow drivers to send and receive text messages using voice-activated systems. There is a strong view that since the laws are hard to enforce, new and advanced hands-free technology will be all that more important.

At a recent Distracted Driving Summit held in Washington, it was emphasized that there is a need for a greater understanding of the dangers of distracted driving.

Considering all the possible dangers associated with technology (inappropriate material, online and game addiction, online fraud etc) nothing is riskier than texting while driving. Perhaps the important truth confronting us all is that texting while driving is not only a risk to the perpetrator but to all innocent road users!

Driving while typing out text messages on a mobile phone is dumb, potentially deadly and should be against the law - everywhere!