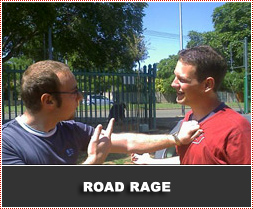 Road rage, aggressive driving and ‘other hazardous driving behaviours’ appear to be of increasing concern in South Africa as evidenced by its increasing publicity in the media and discussion in society. Internationally, road rage and aggressive driving are reported and perceived to be a huge problem. However, there is a paucity of scientific South African data on driver aggression. Considering the high international prevalence and the disproportionately high traffic statistics in the South African context, it was pertinent to initiate this exploratory study to determine the nature, extent and profile of these behaviours. The study was undertaken in collaboration with the University of Natal Interdisciplinary Accident Research Centre (UNIARC), who also provided the funding for the study.

A total of 1006 participants were included in the study. The target population was urban motorists in the Durban Metropolitan Area and the sample was acquired from randomly selected petrol stations in Durban. The study was a cross-sectional descriptive survey and an interviewer-administered semi-structured questionnaire was used for this purpose.

Driver aggression was categorised into four sub-scales: 1) mild, verbal but non-threatening expression of annoyance, 2) verbal or another expression of anger directed at the offending motorist, 3) threatening or intimidating behaviour, and 4) experience of rage and ‘loss of control’, direct confrontation and pre-meditated behaviour. Sub-scales 1-2 provided a measure of aggressive driving behaviour while sub-scales 3-4 provided a measure of road rage. A modified semantic differential on a scale of 1-10 was used to measure driver aggression and other hazardous driving behaviours.

The sample was characterised by fairly experienced motorists, as indicated by the relatively large proportions of those that drove almost every day and by the relatively high averages for the distance driven per day and number of years of driving experience. The general concern of driver aggression was found to be justified. Prevalence of at least one aggressive driving behaviour that was experienced as a victim per aggression group ranged from 24% (group 4) to 95% (group 2 and 3) while the frequency of experiencing these behaviours was the highest for group 3 behaviours followed by similar values for group 2 and group 4. As perpetrators, the prevalence ranged from 10% in group 4 to 87% in group1.

'Other hazardous driving behaviours' were also prevalent – just more than half the motorists reported driving above the posted speed limits half the time that they would get an opportunity to and about one-tenth acknowledged driving under the influence of alcohol.

Motorists rated the behaviours relating to minibus taxi drivers to agitate them most often. Also, the common perception was that driver aggression was more prominent during peak hours and during festive periods.

Many predictor variables were identified for driver aggression and 'other hazardous driving behaviours' based on demography (gender, age, education and race), with general driving characteristics (driving experience and type of vehicle driven) and with fines, collisions and the carrying of weapons.

This exploratory study is an integral first step to provide scientific baseline measures for these driver behaviours. The results have important implications for policy and practice and the utility of this data is discussed. An ecological and health promotion approach is used as a framework to recommend appropriate intervention strategies.

The full report on this study may be downloaded from here