How do Seatbelts Save Lives? 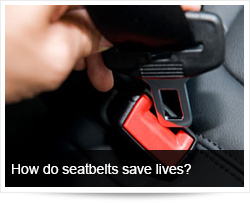 How do Seatbelts Save Lives? The Mechanics of a Seatbelt Explained

When you use the word seatbelt, people often think only of the "webbing." The black (or another colour) strap you pull across your lap and chest.

But there is more to this amazing invention than a mere belt to hold you back. So - let's look at the components of the seatbelt first, shall we:

The webbing - the thing you see most of - is not just any material. In order for it to be effective, it needs to be able to restrain you, it needs to be able to withstand enormous forces but it must also not be SO rigid that it can injure you. To this effect, the seatbelt webbing is slightly dynamic; it stretches a little under force.

The fibres are finely woven in a way that allows them to move a bit. This makes the material soft (so as not to be uncomfortable), yet very strong.

It must also be long-lasting and it must withstand sweat (acids) and exposure over a reasonably long period - typically longer than the life of the vehicle.

The anchor points of the seatbelt system form a vital part of the system safety. Under the kinds of forces experienced in the full-frontal collision, these need to be and stay secure.

When we examine a vehicle for seatbelt use or when we do a Technical Fleet Audit, we check that all the anchor points are secure, free of damage or wear and properly tied down.

These are the points where the greatest forces are exerted and the best seatbelt system in the world will not function effectively if it is not properly secured and maintained.

The seatbelt buckle has gone through a variety of evolutions. First, it was very much simply a latch system.

But - after people got stuck in cars and burned to death, after elbows knocked the buckles, resulting in release and after people failed to be able to exit while hanging upside down because too great a force was needed to release it (among other things), seatbelts pretty much evolved to where they are today.

The buckle release catch is now recessed (preventing elbows from releasing it), the release mechanism is designed better and the unit is designed to work even if the plastic melts in a fire.

The Lock and Pawl system

The lock and Pawl system is actually rather complex, as this image clearly shows: But - in layman's terms, this is how it works:

Essentially, the seatbelt is wound around a geared spindle. If you pull it gently, the gears will not engage and the seatbelt comes out.

If you pull it hard, the gears will engage and the seatbelt will be held in place (and you know how irritating it is when you want to put on your seatbelt quickly, but it keeps "getting stuck," right?).

Now - if there is a lateral or longitudinal force on the vehicle, this causes a little weight to shift and to engage the gears as well. Then the seatbelt will also lock in place.

This is to allow you to be able to use it but for a roll-over or collision to result in restraint from the angular forces or from the rapid deployment of the seatbelt.

Modern vehicles also have shackle sensors that allow the airbag deployment unit to determine if a seatbelt is worn. If not - the airbag will not deploy, since the occupant would not be restrained and will thus crash into the airbag.

While some are very complex, this is basically a unit that will automatically "tighten" the seatbelt on impact.

There are a variety of designs - some use a controlled "explosion" like an airbag while others use spring tension.

This system is designed to ensure that the seatbelt is firmly and securely fastened around the occupant when a collision or roll-over occurs.

It has been found that even in rear-end collisions, where this kind of system is not installed, occupants COULD be ejected out of the vehicle, towards the rear from underneath the seatbelt webbing - especially if their particular seatbelt design results in a slack belt system (too loose around the body).

Finally, we can now get to the seatbelt (as a whole) and whether it saves lives, or not.

Firstly, we need to understand that seatbelts are not "miracles." They have operational limitations.

At higher speeds (say, beyond 80 Km/h), if you collide with a fixed object, the system could become part of the fatality mechanism.

This is because the system is designed to reduce the RISK of injury or death, not PREVENT death in all its forms.

In order to understand this statement, we need to look at the dynamics associated with (say) a frontal collision and the sequence of (relevant) events (with some assumptions):

In all this, if the collision was not too severe - the occupant/s will essentially have decelerated slower than the vehicle (which is metal) and if all goes well, they will survive with nothing more than a sore
chest...

But what if the forces are extreme? What if this was a collision with a solid wall, at 100 Km/h (or more)?

Now the deceleration is STILL too extreme for the human body to tolerate. The internal organs are fragile and the (eventual) deceleration on them are so severe that internal injuries can prove
fatal.

You can read about this - which happens in about 18% of automobile collisions - on Wikipedia at  http://en.wikipedia.org/wiki/Traumatic_aortic_rupture

Now that you understand the concept of delayed (or reduced) deceleration being the key to seatbelt design and its influence on survival rates, there is another issue to consider: The type of collision.

In a side impact collision, the distance between the occupant and the vehicle (door/frame) could be as little as centimetres.

Ignoring side-impact airbags for the moment, you will immediately see that - when a vehicle is struck from the side) the nearest occupant will take the full brunt of the collision almost directly.

In these cases, the seatbelt will be ineffective, since it is designed to keep the occupant "in the seat," but the seat is right next to the door.

So - for the purpose of survivability, seatbelts can have a little positive effect in side-impact collisions, unless the collision is from the far side and the forces are (again) not too great.

In roll-over collisions, seatbelts help only by keeping the occupant in the seat (this is what the lap belt is for).

But if the roof caves in, the seatbelt will not protect the head of the occupant.

Equally - if a collision occurs where a vehicle (like a truck) penetrates into the cab of a lighter vehicle, the driver or occupants could be killed where they sit.

In such cases, seatbelts are all but ineffective.

But - fortunately, most vehicles are moving forward when collisions occur, so seatbelts STILL SAVE LIVES - but only if they are worn!