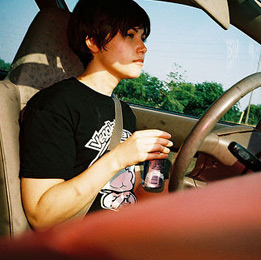 Too many accidents are caused by tired drivers falling asleep at the steering wheel. They either cause the accidents or are unable to avoid accidents which alert drivers would have been able to avoid. Tired driving is sometimes referred to as the silent assassin because sleepiness behind the wheel really kills!

The topic of tired driving is often referred to in discussions on driver tiredness, drowsiness, driver fatigue etc. This has been recognized by road safety experts worldwide as a major threat to road safety – but too often is not given enough attention by drivers and fleet operators.

Tired drivers cause thousands of deaths and serious injuries every year, yet even professional drivers (and their bosses) don’t always acknowledge the danger and pay enough attention to measures of avoidance.

In this section we would like to consider safety advice and recommendations – and pay special attention to energy drinks as an aid to driver alertness. We will also reflect on caffeinated drinks which have been the topic of some criticism.

The US National Safety Commission (NSC) has issued an alert for those driving under caffeine intoxication, similar to warnings associated with drinking alcohol and driving. Excessive caffeine consumption can cause similar symptoms to alcohol intoxication. The American Food and Drink Administration (FDA) has attributed symptoms such as irritability, nervousness, irregular or rapid heartbeat, muscle twitching and rambling speech to what it terms “caffeine intoxication”.

Both tired driving and drunk driving are dangerous but in different ways. An important difference is however that there are severe penalties for driving with small amounts of alcohol in your bloodstream, but almost no penalties for driving while excessively tired. Perhaps it is time that road users and road safety authorities pay closer attention to driver fatigue as well!

In-depth research starting in the early 1990s has been correlated with police studies of motorway accidents. Various projects have focused on sleepiness and sleep patterns in factories and amongst ship and shift workers and more importantly on the driving ability of drivers. During some of this research drivers have been monitored by electrodes while they provided responses to how tired they are on a scale of one to 10.

The Loughborough Sleep Research Centre in the UK has spent more than a decade investigating driver fatigue, analysing thousands of motorway accidents and demonstrating the true extent of the problem.

Working with, among others, the UK government, police forces and companies in the transport industry, and running special training courses for drivers and their trainers, the centre uses sophisticated software and a driving simulator. This evaluates driving behaviour and the physiological state of tired drivers using an (electroencephalogram).

Research findings provide greater insight to the magnitude of this road safety threat:

Who are most affected?

When are drivers most at risk of driver tiredness accidents?

All drivers have their own natural/ biological body clocks. Everyone suffers a dip in the early hours and mid-afternoon. There are however common trends that needs to be given more attention:

When is the best time to have a rest stop and enjoy an energy drink? It is most important to remain vigilant behind the steering wheel at all times – and not to wait till you really can’t drive anymore.

There are a few tell-tale signs that a driver is over –tired - and it is important to know these signs – both when driving or when you are a passenger in the car driven by such a driver:

Energy drinks might provide the boost needed to drive to the next safe rest stop for that much needed nap before continuing with the journey!!

Too many road users believe that they can through their own ingenuity manage to stay alert behind the wheel. They are in denial as to the signs their bodies offer with regards to tiredness – and disregard the need for some rest.

In more than a decade of research and simulator tests on drivers, none of these strategies managed to cure or prevent sleepiness:

Dr Louise Reyner, who has worked with the head of the Loughborough Sleep Research Centre, Professor Jim Horne, for more than 15 years, says they have proved categorically that no driver can fight sleep. The best advice to drivers is to avoid the situation.

It is most important to reflect on the research and study results about energy drinks and driver tiredness. There is much debate on the effectiveness of caffeine and energy drinks - and we would like to share some of these findings:
Caffeine

The Arrive Alive website would like to advise owners to consider several measures to enhance driver alertness and avoid tired driving:

All the statistics show that drivers who are over-tired are just as dangerous as those who have drunk too much alcohol. Yet drink-driving is condemned and reviled, while tired driving barely gets any attention.

If you drive while tired you are a risk not only to yourself –but also to all the other road users!! It is important that we enhance awareness amongst all road users about the dangers of driver tiredness - and to advice drivers to drive when well rested and to remain vigilant at all times!

Remember: Energy Drinks are an Aid to Driver Alertness - not a Cure for Driver Tiredness