The South African Law on Seatbelts can be found in Regulation 213 of the National Road Traffic Act. The Act stipulates as follows: 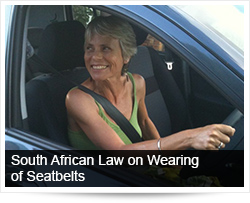 (b)       a child is a person between the age of three years and 14 years, except where such person is taller than one comma five metres;

(c)        No person shall operate a motor vehicle on a public road unless the seatbelts fitted to such motor vehicle are in good working order.

(e)        In addition to the requirements of paragraph (a), no person shall operate a minibus or midibus, first registered after 04 September 2006,operating in terms of an operating licence, unless seatbelts are fitted for every seat in the motor vehicle.

(4)       No adult shall occupy a seat in a motor vehicle operated on a public road which is fitted with a seatbelt unless such person wears such seatbelt: Provided that the provisions of this regulation do not apply while reversing or moving in or out of a parking bay or area.

(5)        No adult shall occupy a seat on a row of seats in a motor vehicle operated on a public road which is not fitted with a seatbelt, unless all other seats on such row which are fitted with seatbelts, are already occupied.

(6)     "(6A) The driver of a motor vehicle operated on a public road shall ensure that an infant traveling in such a motor vehicle is seated on an appropriate child restraint: Provided that this provision shall not apply in a case of a minibus, midibus or bus operating for reward.".

(8)        (a)       A seatbelt shall comply with the standard specification SABS 1080 “Restraining devices for occupants of adult build in motor vehicles (Revised requirements)” and bear a certification mark or approval mark.

(b)      A child restraint shall comply with the standard specification SABS 1340 “Child restraining devices in motor vehicles” and bear a certification mark or approval mark.

(9)         The MEC may exempt a person from the provisions of this regulation on such medical grounds and under such conditions he or she may deem expedient.

(10)       An exemption from wearing a seatbelt in a prescribed territory shall be deemed to be an exemption in terms of subregulation (9) for the period of validity thereof. 1.      AARTO makes provision for a 50% discount if the fine is paid within 32 days, therefore all of the above can be divided by two!

2.      AARTO is ONLY IN FORCE in the jurisdictions of the Johannesburg and Tshwane Metropolitan Police Departments.

3.      Fines in other Magisterial Districts can and probably will differ dramatically.

4.      There are 284 local authorities, 8 Metros and 9 Provincial authorities in South Africa and therefore the disparity between fines may be vast.