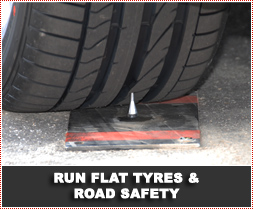 During the past few decades the motoring manufacturers have made significant design contributions to the safety of all road users. Apart from seat belts, ABS and airbags, car manufacturers have also developed active driving assistance systems, such as traction control and computer-controlled stability programmes. More recently there has been a focus on tyre pressure monitoring systems (TPMS) and the development of tyres with run flat capability.

A run flat tyre is a pneumatic vehicle tyre that is designed to resist the effects of deflation when punctured, avoiding hazardous tyre changes and allowing the driver to continue the journey at a reduced speed. Run flat tyres have been described as the "first important revolution in tyre design since the invention of the pneumatic tyre."

The speed and distance to be travelled to safety will depend on factors such as the amount of people in the car, whether the boot is fully loaded etc. It is best to follow the guidance provided by the tyre or vehicle manufacturer, but a rough guide would be the following:

Run flat tyres were first patented in 1892, re-developed in 1978 and offered as an option in the 1990s mainly for two-seat sports cars with little room for spare tyres and jacks. These tyres have since become popular with manufacturers of high-end luxury cars, because of their safety and convenience, costing double the price of sports tyres. 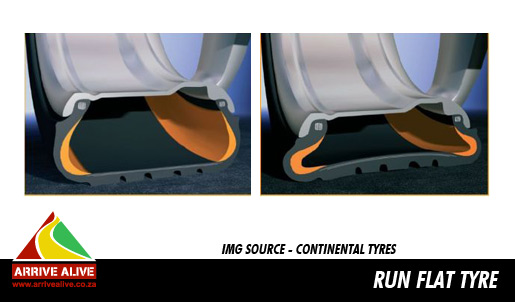 How does Run-Flat Technology work?

It is important to consider how a tyre loses air pressure and how the run flat tyre manages to ensure safety and continuous driving.  A tyre loses air either through penetration or a cut to the tread or sidewall area, usually causing loss of control of the vehicle or forcing the driver to stop and change the tyre.

Run flat tyres work like conventional tyres. They still contain air; to reduce the load that the run-flat system has to bear, to spread the weight of the vehicle evenly on the road surface, and to maximise the contact patch between the car and the road. Once run flat tyres detect the first signs of deflation (usually caused by punctures), it automatically applies a number of counter-effects to ensure safety and continuous driving.

A run flat tyre offers a very high standard of driving comfort; the driver will barely notice any loss of pressure in the tyre. For this reason these tyres are used on vehicles equipped with a tyre pressure monitoring system, which will display the drop in tyre pressure on the dashboard instrument panel.

There are many different types of run flat tyres from a variety of tyre manufacturers. We can however identify 3 basic technologies:

The tyre is built with stiffer side-walls (sometimes 50% thicker) that can bear the weight of the vehicle even when the pressure within the tyre is greatly reduced. The side-walls are typically constructed of layers of rubber and a heat-resistant cord that prevent the side-walls from folding or creasing. The bead around the edge of the tyre is also specialized to grip the wheel rim such as to avoid becoming detached from the rim. The tyre’s side walls are usually made of an extra layer supported by a heat-resistant cord to keep the tyre in the original position even under the weight or road bumps.

These tyres contain an extra lining within the tyre that self-seals in the event of a small hole due to a nail or screw. In this way, the loss of air is prevented from the outset so that that the tyre is either permanently self-repairing or at least loses air very slowly. This type is usually less efficient as it still allows the air to get out of the tyre – until the seal comes into effect. Additionally, it could fail to stop the deflation completely, but still it could allow the driver to reach the first service centre.

In this system, there is an additional support ring attached to the wheel that can support the weight of the vehicle in the event of a loss of pressure. While these systems generally offer better ride quality because their sidewall's stiffness can be equivalent to a standard tyre, the requirement to have both special wheels and special tyres increases cost and limit these systems from widespread use. 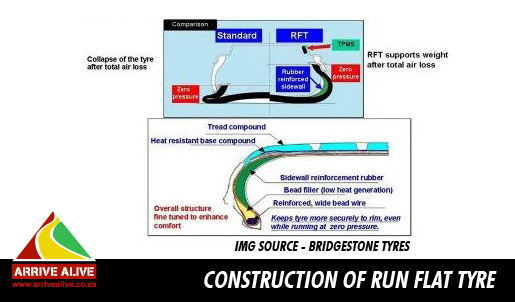 Run flat tyre technology has been developed as a solution to overcome the danger of a tyre deflating while you’re driving or changing a tyre next to the road. Run flat tyre technology does away with concerns about flat tyres and the added dangers of fast moving traffic, poor visibility, bad weather or criminal activity on the roads. The run flat tyre enables safe driving from the point when a puncture occurs until the driver can drive the vehicle to a safe location.

The benefits of run flat tyres could be summarized as follows:

We also need to provide some insight and share the criticism raised about run flat tyres. The critics who see these tyres as a waste of time and money warn that:

Many of these concerns are being addressed by vehicle and tyre manufacturers. It is however important that the road user and vehicle owner are alerted to these points of criticism. This will allow the vehicle owner to raise any points of concern with the vehicle dealer and gain much needed peace of mind!

Advice for the Driver with Run Flat Tyres

Whether you are the vehicle owner or the driver of a vehicle with run flat tyres, it would be worthwhile to consider a few safety aspects before going on the road.

Safe tyres are very important safety components on each and every vehicle. Not only are they important for steering and proper vehicle control, but also for speedy and effective response in the event of emergency and accident avoidance. On South African roads we have the added danger of both questionable road conditions off the main roads – and criminals preying on drivers and passengers in distress. If it is possible to avoid stopping next to the road to change tyres - this could only benefit the safety of drivers and passengers.

We can expect that run flat tyres will increase in popularity and be an important addition to many of the newer vehicles on our roads!