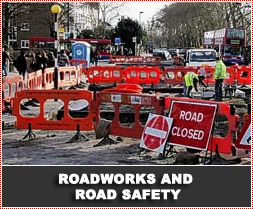 In the City of Johannesburg, it was found that the level of obedience to speed limits in road works was much lower than elsewhere and that the attitude of some motorists was alarming.

Drivers are at risk in roadworks where the lanes may be narrower, the layouts change and there is no hard shoulder for broken down vehicles. This was confirmed by Mr Nick Stroebel, Site SHE Manager at the roadworks stating that due to the fact that widening has occurred it means that the original lanes have been reduced from 3.7m to 3.3m per lane.

Just because there may not be road workers present it doesn't mean that the motoring public is not at risk from the unexpected.

Temporary speed signs at roadworks are not suggested speeds - they are the legal limit while the signs are displayed. Workers and motorcyclists are particularly at risk from flying stones and loose surfaces. Loss-of-control accidents are much more likely. One small mistake could easily cost a workman his life.

Additionally, roadworks present a clear danger to motorists and road workers alike - a danger that is often forgotten. Despite all the measures undertaken to maintain safety, approximately 22% of motorway accidents occur at roadworks. In addition road, works are estimated to cause up to 15% of network congestion and are regularly subject to public complaints.

Speed enforcement by the camera has shown a decrease of 55% in the accidents that happened in the construction area, between Maraisburg Road overhead bridge and the Soweto High Way for the period of April 2009 compared to March 2009.

Why is speed reduced?

Roadwork activities can cause dangerous situations for both road users and road workers.

can help to reduce speeds at roadworks. Impact attenuators lower the risk and reduce the severity of roadworks crashes.

Roadwork activities can consist of

Most maintenance work recurs annually, e.g. maintenance of trees and other plants, and sweeping the emergency lanes and drainage gutters.

Roadwork activities can also consist of installing detection loops, and the maintenance of signposting and constructions. In addition, large-scale maintenance occurs approximately every fifteen years, such as renewal of the road surface (re-tarring) or replacement of guardrails.

Roadwork activities on or alongside a road cause

This can result in

Therefore, measures and facilities are necessary during roadworks to limit the negative effects on road safety and traffic flow.

At which locations and under what circumstances do roadworks crashes happen?

Who is involved in road works crashes?

In by far, the most roadworks crashes only road users are involved. Crashes involving road workers form only a small part of all road works crashes (Hagenzieker, 1998).

A crash analysis using BRON data shows that freight traffic is relatively often involved in road works crashes. Overall, a freight vehicle is involved in 6% of the crashes; this is 14% for roadworks crashes. Other studies confirm this picture (Van Gent, 2007).

What are the causes of roadworks crashes?

Short headway distances and speeding play an important role in the occurrence of rear-end crashes.

An extensive literature study of road user behaviour in the vicinity of roadworks was carried out in the European ARROWS project (ARROWS, 1999). The European PREVENT project has summarised the main findings and has studied more recent literature (PREVENT, 2003).

The most consistent finding is that:

In a number of urban crashes, especially slow traffic enters a blocked road and then collides with works traffic, falls, or rides into a ditch (Janssen & Weijermars, to be published). Lack of clarity about the diversion and the lack of distinct marking of the work area seem to contribute to these crashes occurring.

Which measures can be taken?

Supplementary measures like enforcement and dynamic speed information can be used to actually exact compliance.

Dynamic speed information is a measure which is used to measure the actual speed of each individual vehicle and communicate it to the driver (feedback). Research has shown that this causes drivers to lower their speed (Geluk et al., 2003).

In 2006, the Ministry of Transport started a new trial to reduce speed at roadworks. Road users were given immediate feedback on their speed, and at the same time, their vehicle registration number was shown. This direct feedback seemed to have speed reduction as a result (AVV, 2007).

The lower a speed limit is, the more it is exceeded. A speed limit seems to be more acceptable and complied with when it is credible. Therefore, in 2005 the Dutch Ministry of Transport introduced new speed regulations during roadworks on motorways. The maximum speed is now 90 km/h and this is only lowered to 70 km/h if the lanes are narrow or if road workers work right next to the lanes without any barriers. When signalling is present on the road, speeds can be differentiated between lanes or for the time of day.

Impact attenuators reduce the risk of crashes and in addition lessen their severity. Barriers lower the risk of a road user driving into the work area, but they increase the possibility of a crash with a rebounding vehicle. Physical barriers must therefore only be placed if they are absolutely necessary (Van Gent, 2007).

Every year, an average of 193 serious injury crashes of which 21 are fatal to occur at roadworks locations in the Netherlands.

Speed measures like enforcement and dynamic speed information (feedback) can help to reduce speeds at roadworks. In addition, the Dutch Ministry of Transport has introduced new, more credible speed limits for roadworks on motorways. The speed limit can also be differentiated across the lanes or for the time of day. Impact attenuators reduce the risk of roadworks crashes and their severity.

The work area must be indicated and the traffic must be guided clearly and unambiguously so that the road user is informed about the road works in time and knows what he is expected to do. There also must be sufficient space or barriers between road workers and traffic.

In order to provide safety for workers and road users, it is essential that motorists comply with the speed requirements for roadworks site.

The deterrent provided by enforcement is key to achieving the compliance needed on a roadworks site.

The provision of speed cameras has proven an effective tool for reducing speed at roadworks.

The use of temporary speed cameras should be seriously considered at road work sites on the strategic road network.

Munden JM. The relationship between a driver’s speed and his accident rate. Berkshire: Transport and Research Laboratory.

Safety of Workers and Flagmen in Construction Zones