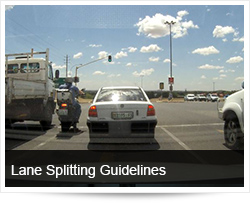 On the Arrive Alive website, we have given much attention to motorcycle/ bike safety in general by looking at aspects such as motorcycle safety through the eyes of the instructor and advice for riding in bad weather.

As many collisions occur when bikers share the roads and perform “lane splitting” we decided to approach our Motorbike expert – Hein Jonker, Founder & Chief Instructor
Motorcycle Safety Institute of South Africa, and ask his advice on when to do this, how to do it and when rather avoid!

Lane splitting safely and prudently is not illegal in South Africa. Here are a few guidelines to help you as a motorcyclist in executing a lane split safely, and to help the motorist understand why we do it.

What is Lane Splitting?

The term lane splitting, sometimes known as lane sharing, filtering or white-lining, refers to the process of a motorcyclist riding between lanes of stopped or slower moving traffic or moving between lanes to the front of traffic stopped at a traffic light.

Motorcyclists, who are competent enough riders to lane split, should follow these general guidelines if choosing to lane split:

1) Travel at a speed that is no more than 20 km/h faster than other traffic – danger increases at higher speed differentials.

2) It is not advisable to lane split when traffic flow is at 50 km/h or faster - danger increases as overall speed increases.

3) Typically, it is safer to split between the No. 1 and No. 2 lanes than between other lanes.

4) Consider the total environment in which you are splitting, including the width of the lanes, size of surrounding vehicles, as well as roadway, weather, and lighting conditions.

5) Be alert and anticipate possible movements by other road users. The Four R's or “Be-Attitudes” of Lane Splitting:

Be Reasonable, be Responsible, be Respectful, be aware of all Roadway and traffic conditions.

These general guidelines are not guaranteed to keep you safe.

Lane splitting should not be performed by inexperienced riders. These guidelines assume a high level of riding competency and experience.

The recommendations contained here are only general guidelines and cannot cover all possible combinations of situations and variables.

Personal Safety: Every rider has ultimate responsibility for his or her own decision making and safety.

Riders must be conscious of reducing accident risk at all times. South African law requires all motorcycle riders and passengers wear a helmet that complies with the DOT FMVSS 218 standard.

Risk of getting a ticket:

Motorcyclists who lane split are not relieved of the responsibility to obey all existing traffic laws. Concerning possible law enforcement action, keep in mind that it will be up to the discretion of the Law Enforcement Officer to determine if riding behaviour while lane splitting is or was safe and sensible or reckless and dangerous.

When is it NOT OK to split?

You should NOT lane split:

Messages for Other Vehicle Drivers

What does the law say?

This topic comes up all the time. It’s completely legal for a motorcycle to pass another vehicle travelling in the same lane and the same direction. Said vehicle (which includes motorcycles), however, may not travel alongside another vehicle though. Refrain from referring to the annulled Road Traffic Act, 29/89.

Regulation 298 states – Passing of vehicle (1) Subject to the provisions of sub-regulation (2) and (4) and regulation 296, the driver of a self-propelled (emphasis added which includes motorcycles) vehicle intending to pass any other vehicle proceeding in the same direction on a public road shall pass to the right thereof at a safe distance and shall not again drive on the left side of the roadway until safely clear of the vehicle so passed:

Provided that, in the circumstances as aforesaid, passing on the left of such vehicle shall be permissible if the person driving the passing vehicle can do so with safety to himself or herself and other traffic or property which is or may be on such road and-

(a) (b) (c) (d) (e) the vehicle being passed is turning to its right or the driver thereof has signalled his or her intention of turning to his or her right; such road is a public road in an urban area and-

(i) is restricted to vehicles moving in one direction; and

Provided further that in no event shall any passing referred to in paragraph (a), (b), (c) or (d) be done by driving on the shoulders of the roadway or the verge of the public road concerned.

(a) (b) (c) the summit of a rise; a curve; or any other place, where his or her view is so restricted that any such passing could create a hazard concerning other traffic which might approach from the opposite direction, unless-

(i) he or she can do so without encroaching on the right-hand side of the roadway; or

(ii) the roadway of such road is restricted to vehicles moving in one direction.

(4) When about to pass oncoming traffic, the driver of a vehicle on a public road shall ensure that the vehicle was driven by him or he does not encroach on the roadway to his or her right in such manner as may obstruct or endanger such oncoming traffic.

(5) The driver of a vehicle intending to pass a stationary bus on a public road shall do so with due care for the safety of persons who are approaching or leaving or may approach or leave such bus.

Also, Regulation 309 (6) (a) states – Persons, other than traffic officers in the performance of their duties, driving motorcycles on a public road, shall drive in single file except in the course of overtaking another motorcycle, and two or more persons driving motorcycles shall not overtake another vehicle at the same time: Provided that where a public road is divided into traffic lanes, each such lane shall, for this paragraph, be regarded as a public road.

Rules of the Road on Lane Splitting

What are the Rules of the Road on Lane Splitting by bikers/ motorcyclists in South Africa?

Motorcycle Safety through the Eyes of the Instructor