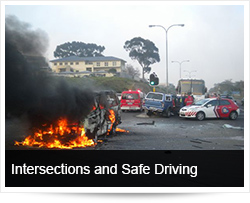 Intersections have been described as one of the most complex traffic situations that motorists, pedestrians, cyclists and other road users encounter daily!

Intersection crashes are one of the most common types of crashes - and also a crash type with severe consequences.

The U.S. Department of Transportation estimates that 43% of motor vehicle crashes occur at intersections or are "intersection-related”.

Knowing the major risks of an intersection collision and how to avoid them can help to minimize your chance of a crash. In this section, we would like to assess these risks and provide advice for safer driving at intersections.

What is an intersection?

Intersections are locations where two or more roads meet, cross or converge and traffic moving in different directions all come together. They come in many different designs, configurations, and sizes. In traffic design, intersections can contain as many as six streets converging. For example, a six-way intersection can involve the crossing of two perpendicular streets, with yet another street crossing them diagonally.

The crossing and turning manoeuvres that occur at intersections create opportunities for vehicle-vehicle, vehicle-pedestrian, and vehicle-bicycle conflicts, which may result in traffic crashes. The definition in itself emphasizes the inherent danger of an intersection, describing an area where vehicles may come into “conflict.”

We have all experienced the sounds of screeching of tyres followed shortly thereafter by the brutal sound of metal hitting metal, typical of a crash at an intersection.  A number of different intersection crash types occur, including: Causes of Crashes at Intersections

We need to ask “Why are there so many collisions taking place at intersections?”

Why are Intersections so dangerous?

Too many road users are killed and left with debilitating injuries from preventable crashes at intersections. Road users must accept that every intersection is dangerous due to the constant flow of traffic- day and night!

But why are these crashes so dangerous? Human error is the biggest contributing factor to road crashes. There are, however, aside from addressing driver behaviour, road engineering and design measures that could assist towards safer intersections. We would like to share some of these:

Being aware of the laws and taking precautions behind the wheel are important and useful steps to avoid a crash in an intersection. Plan your trip to avoid rushing to make an appointment. Plan ahead, anticipate potential traffic delays and leave early for your destinations.

We would like to offer some suggestions for safe driving at intersections: Considerations at Intersections with Traffic Lights

There is a need for special caution when large trucks and farming equipment approach intersections.

Besides compliance with the rules, driver etiquette is the first measure toward improving intersection safety. The intersection is no place for selfishness. Be prepared to be the safer driver by showing courtesy towards other drivers!

Clearing the Road after a Road Crash

Clearing the Road after a Road Crash When the injured have been taken to hospital or have been properly tended to, the drivers - if they have not been injured - can attend to the damaged vehicles. Remember, however, that when someone has been killed or injured in an accident in an urban area it

We have all driven past an accident scene or witnessed the flashing lights of an ambulance heading towards the scene of an accident or other medical emergency. The first hour of response is most important and is commonly known as “The Golden Hour”. Emergency medical services have stressed

Crash avoidance and bringing the vehicle to a sudden stop requires not only effective brakes but also the ability to react swiftly and apply adequate pressure to the brake pedal. Despite this awareness, few drivers pay enough attention to the footwear that would best enable them to control their vehicles

Safety Hints: Hostage Situations and Hijacking The following safety hints are aimed at providing a potential hostage or hijacking victim with practical advice and enhance road safety. It is important to note that most hostages, victims of hijacking survive the incident and are eventually released

Don't Break Your Back Whilst Driving

Driver Fitness and Back Pain Back and neck pain is serious occupational diseases which can result in a loss of productivity and even costly workers’ compensation claims. Truck driving, in particular, is an occupation that is prone to causing back and neck pain. However, there are some simple

Absorption of Alcohol in the Body