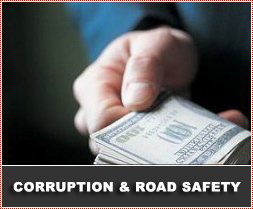 Effective traffic enforcement is the most important requirement for road safety. We can have the best Rules of the Road, but if these are not enforced effectively, we will continue to have an increase in fatal accidents on our roads. Traffic enforcement is threatened by the crime of corruption, and it is important to understand the nature of such corruptions and the strategies to fight this evil.

Corruption or bribery is described in legal terms as the practice of tendering [and accepting] a private advantage for the performance of a duty. This has also been described as the abuse of entrusted power for private benefit and basically entails an official doing, or not doing, something for some sort of gain. Where the levels of corruption are high it is indicative of low levels of respect for the law.

The impact of corruption increases risk of unsafe conditions on both our roads and transport systems. On a grand scale, money intended for maintenance of roads or service provision and the upgrading or provision of facilities is diverted for private gain. On an immediate level, unqualified drivers and unroadworthy vehicles are granted licenses.

If You Offer or Accept a Bribe to evade a Traffic Fine - You support continued Road Carnage! https://t.co/eXAC1tGNZo pic.twitter.com/hnv7eSffwA

The effect of corruption is not only a loss of state revenue. When corrupt officials allow motorists who speed, or who are driving vehicles that are not roadworthy, to proceed with their journey, the consequences for other road users are potentially disastrous. A breakdown in public trust of the integrity of traffic officials is also likely to result in an increase in lawlessness among road users.

Studies on crime in South Africa revealed that corruption was most evident in encounters with traffic officials, followed by the police, and then during interactions with officials over employment opportunities. This support the perception that corruption is a problem in local government traffic departments, municipal police services and the SAPS, and highlights the discretionary power of some of these officials. For example, the public largely interacts with traffic officials on the road where the actions of corrupt officials are difficult to monitor.

How does corruption manifest in the field of traffic enforcement and road safety?

Government and Strategies to Prevent Corruption

Government has acknowledged the existence of corruption and the threat that this pose towards road safety. The Road to Safety Strategy puts a high priority on co-ordinated action in all the key areas of road safety: law compliance, driver fitness and training, vehicle condition, fleet regulation, overload control, pedestrian education, direct community road safety participation and active passengers and public empowerment.

Jeff Radebe, a former Minister of Transport has emphasized the strategy in combating corruption through a Special Investigation Unit. In a statement he revealed the following:

“We have committed a budget of R20 million per year until 2011 to the efforts of the Special Investigation Unit and I am happy to report that this investment immediately started paying major dividends and will undoubtedly continue to do so. In addition to reducing fraud and corruption, as widely reported in the media in recent months, a knock-on effect of the Special Investigation Unit’s activities is that there are fewer drivers on our roads with licences that were issued fraudulently, which in turn bolsters our road safety programmes such as Arrive Alive. It goes without saying that road safety is one of the Department’s highest priorities.”

Vehicle testing and safety has also become a top priority for Government, as demonstrated by the Operation Juggernaut and other campaigns. This included the screening of vehicles, issuing of fines and removal of unroadworthy vehicles. Sweeping amendments to the Road Traffic Act are also considered that will prevent a person who fraudulently obtains his or her driving or learner's licence from re-applying for such licence for a certain period of time.

Zerk Bester, Deputy-Director in charge of the Special Investigation Unit [SIU] explained how the Unit attempts to combat Corruption. He revealed that the key objectives are to identify and cancel invalid licences, to create a deterrent to prevent officials from participating in fraudulent activities and to address weaknesses in the control environment. Some of the improvements facilitated by the SIU include ensuring that testing functions are taken over by qualified personnel at Drivers License Testing Stations [DLTCs]  identified as employing unqualified staff, implementing document control systems at DLTCs, training filing clerks to comply with the requirements of the National Road Traffic Act and repairing defective testing equipment.

General awareness among officials regarding the efforts and successes of the SIU has contributed in no small part to its ongoing success. The Minister of Transport has stated that the Special Investigation Unit’s visibility at DLTCs when auditing files and instituting action against corrupt officials has resulted in heightened awareness – among both officials and the public – of the consequences awaiting those who involve themselves in fraudulent and corrupt practices.

Enforcement and Technology as a Preventative Measures

Fraud prevention is one of the main features of the eNaTIS licence appointment booking system, now in use in a number of provinces. Corrupt practices will be eliminated in the following ways:

Government and Road Safety Authorities have welcomed media institutions or anyone else who wishes to help stamp out corruption and have offered to cooperate and give assistance to them to fight the common enemy of corruption.

Strategies to include the community in the fight against corruption include:

The biggest concern raised in this invitation for public involvement is that many citizens do not know how to report corruption, do not believe that doing so will change anything, and, despite good whistleblower provisions, are afraid of the consequences if they do report.

In the long term, the public need to believe that their actions will result in speedy investigations and when appropriate, prosecution and conviction. One way of doing this is to inform citizens of convictions achieved as a result of information provided by whistleblowers.

The more complex issue is dealing with the fear of reprisal. The SA Law Commission is reviewing ways to improve the Protected Disclosures Act that should hopefully see whistleblowers, particularly those in the workplace, making better use of this instrument.

South African citizens, empowered by the constitution, should be at the forefront of ensuring clean governance. This will require raising awareness, education, and a belief that such actions – with adequate protection from the state – can make a real difference. A failure to achieve this may prove the Achilles heal of sustained attempts to combat corruption in South Africa.

As long as there is no respect for the rule of the laws of the road, the road will be an unsafe place. It is important for all road users to be aware of the dangers of corruption – and not to endorse corruption through their own conduct. Corruption not only is to be found in the actions of the official who asks for or receives the bribe or benefit – but also on the part of him who offers the bribe.

The Arrive Alive Road Safety website would like to support all efforts aimed at combating corruption and would like to offer assistance in facilitating communication from the public to blow the whistle on these offenders. Another new development at the Road Traffic Management Corporation is that the National Traffic Anti-Corruption Unit has introduced their Twitter handle @NTACU_RTMC and e-mail address ntacu@rtmc.co.za where the public is encouraged to report traffic related fraud and corrupt activities.

Corruption is the abuse of public resources or public power for personal gain.

Corruption Watch is concerned with any such abuse by anyone at any level of government or in business.

The first step in bringing an end to corruption starts with you: obey the law and encourage those around you to do the same. Justice Project South Africa is a non-profit company, duly registered in terms of the Companies Act, 2008 and is primarily involved in the prevention and addressing of corruption and power abuse in law enforcement as well as in the education of the public in a wide range road safety issues.