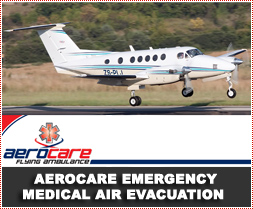 Aerocare operates from the base of operations at Bloemfontein International Airport with 2 dedicated aircraft and crew, namely a Pressurized Beach craft King Air 200 and a Cessna 402. The Pressurized Beach craft King Air 200 is capable of a speed up to 500km/hr with a range of 4000km. This plane has a permanently installed dual ICU stretcher with 2 patient capability, primarily focused on performing regional missions in Southern Africa and also neighboring countries, incl. Botswana/Namibia/Mozambique and Zambia.

Aerocare also has a  Cessna 402 Unpressurised airplane with a speed of up to 330km/hr and a range of 1500km as backup aircraft. This aircraft is primarily used to do rescue missions into the Karoo, Free State and Northern Cape (Central South Africa), where some of our customers often prefer this aircraft due to its lower cost structure.

This emergency medical evacuation service has more than 32 years experience in the delivery of this life saving service in and around South Africa. The fixed wing aircraft are dedicated Intensive Care air ambulances. Aerocare strives to deliver an unrivaled Advanced Life Support service to patients that need this service. The flight crew is on standby 24 hours a day, 7 days per week. It is standard practice to have an ICU nurse and a Doctor on every flight. Doctors are selected and assisted telephonically by Prof Francis Smith regarding every specific case.

Aerocare and the Aeromedicine Service

On the referring Doctors medical Judgment ….Aerocare will dispatch without delay, the ICU Staffed and equipped pressurized King air.

This is to be performed from a medical funds position, as long as the patient has not been admitted to a Hospital, and provided that the patient fits the standard aero medical criteria as stipulated below. Flying time to most Airfields in central South Africa is less than 1 hour. For more information on this kindly call Aerocare on 0825558222

If the referring doctor’s ATLS and or ACLS or PALS  is up to date especially in medical cases where time is the issue, Aerocare will cut down on the dispatch time by departing without delay from the Base in Bloemfontein.  Paramedics and the ICU sister plus all the relevant equipment is dispatched where the doctor then assist the patient on the return flight with Aerocare’s airborne crew to the referring hospital. Aerocare will then return the doctor to his practice after the successful transfer.
Doctors offering to perform medical services as flight doctors may contact Aerocare at 0825558222. 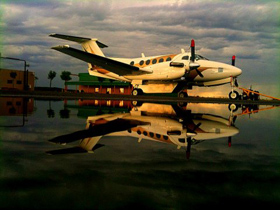 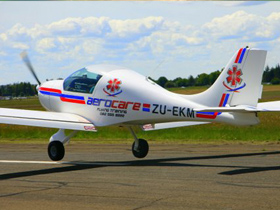 The delivery of health care in South Africa has changed dramatically over the last decade. The emphasis has been placed on primary health care, which ideally is situated closer to the community. At the same time there has been a consolidation of tertiary health services, within both the public and private health care sector. The disease and injury profile has probably not altered that significantly over the same period of time. Trauma and violence still play a significant role in South African society, as does the ever increasing incidence of HIV/AIDS and tuberculosis.

Our program  is based on the philosophy of ‘the most appropriate resource for the particular requirement’.

Summary  - In a Nutshell

Aero medical transport is no longer a rarity but rather an everyday event. Although initial development was under the auspices of the military a highly successful civilian model has developed. South African medical practitioners often shy away from utilizing an aero medical service due to the perceived high financial cost and frustrations of dealing through the Medical aid call centers.

When used appropriately “ By calling Aerocare direct on 0825558222 the aircraft can greatly benefit patient care while at the same time in most cases costing less than equivalent road trans-BHF tariff, patients are delivered timorously to definitive tertiary care.

Appropriate utilization is based on many parameters, including medical criteria as well as distance. South Africa is a country characterized by long distances.

These distances are no longer an obstacle as regards the delivery of emergency medical services. 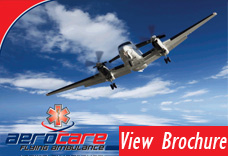