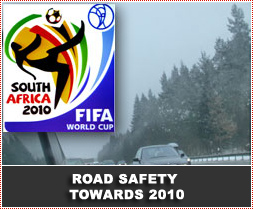 The World Cup 2010 poses a massive challenge as well as an opportunity for South Africa. Since the official handing over of the rights to host the Soccer World Cup in 2010 several Speeches in Parliament and Conferences made reference to the challenges, risks and proposed strategies. This has been done on government, provincial and municipal level and the private sector has also provided recommendations. It is important that this be given exposure to raise awareness of the impact that the World Cup in 2010 might have on road safety. During the mid-year Cabinet Meeting [Lekgotla 26 – 28th July 2006]the discussion included the strategy for ensuring that government fulfils its obligations to FIFA for the hosting of the 2010 FIFA World Cup

The World Cup in 2010 is an opportunity whose benefits can and should ascend far beyond soccer. Not only is it capable of facilitating social cohesion, but can also be a catalyst to implement transport solutions that will leave us with hugely improved infrastructure and other benefits for road safety.

The South African Cabinet has recognized the opportunities that come with the hosting of 2010. These include the possibility to:

It is important that the road safety initiatives focus on enhancing infrastructure not as once-off events but also to provide value long after the World Cup.  A recent survey by the HSRC provided a brief statistical backdrop of what the 2010 World Cup will be about, and made reference to the following:

The HSRC research will be ongoing and also measure the potential of South African cities to host the 2010 World cup in comparison with other world-class countries. The research will be divided into 3 periods i.e. Short term up to 2006, and then repeated for 2008 and 2010; Medium-term – 2005; Long term – 2010/11.
The Minister of Transport, Jeff Radebe has remarked that the successful hosting of the World Cup 2006 has provided valuable lessons for South Africa in 2010. The various delegations from 2010 host cities, provincial and national government and private sector delegations, to Germany, will form a treasure trove of experiential learning about how South Africa, within her peculiarities, can do to stage a successful World Cup. In addition to this experience, the assistance from FIFA and further learning experiences from the 2008 Olympics, has convinced the Minister of Transport that South Africa is well on track with the preparations.

The Facts on Road Safety in South Africa

The Organisation for Economic Cooperation and Development (OECD) described South Africa’s transport system as "stellar" in an African context but notes that the quality is uneven and requires significant investment. It highlights government co-ordination as a major factor for success. The National Household Travel Survey and other research revealed the following:

Click here for the “Pocket Guide to Transport in South Africa”

The Challenge for Road Safety 2010

The Challenges for Road Safety towards 2010 include:

Road safety initiatives will include those at National, Provincial and Local Government level.  President Thabo Mbeki has confirmed on the 30th of July 2006 that government has made R3bn available to improve South Africa’s public transport systems. The Minister of Transport has indicated that the following are imperatives to achieving the goal of Road Safety:

An operational and resource plan for all aspects of the 2010 FIFA World Cup has been completed. The South African government will work with all stakeholders to:
* ensure that infrastructure projects are completed on time and are undertaken with confidence and efficiency
* ensure common action across the three spheres of government, State-Owned Enterprises, business including Small and Medium Enterprises (SMEs), the South Africam Football Association/Local Organising Committee (SAFA/LOC), the union movement and across society as a whole
* encourage the development and implementation of a vision for the national soccer team
* monitor preparations and implementation of the security strategy and transport plan, and articulate them widely to ensure appreciation of this work within SA and internationally
* promote international marketing on a massive scale in conjunction with the International Marketing Council to take advantage of this unique opportunity to improve perceptions of our country and continent.

Several provinces have already planned extensively towards addressing “Road Safety and the 2010 World Cup”. These strategies include:

The need for co-operation between Government and the Private Sector in enhancing road safety offers an opportunity for business to provide world-class products and services and to showcase this on the international arena.

One of these business spheres to benefit will be Intelligent Transport Solutions, a new interdisciplinary profession that developed from the convergence of traffic engineering, information technology and telecommunication.

Examples of Intelligent Transport Solutions include:

It was noted at the South African Cabinet mid-year meeting that making the 2010 FIFA World Cup a success is something which Government and the soccer authorities cannot achieve alone. It will require the participation of all South Africans, in their occupations, as volunteers and as the country’s brand ambassadors. Attention will be paid to identifying initiatives which will reinforce public enthusiasm and involvement in the preparatory work.

[The website www.arrivealive.co.za will add new content on the strategies and initiatives towards 2010 as it becomes available. The above content has been compiled from speeches before Cabinet, Parliament, Provincial Government and at Road Safety Conferences]